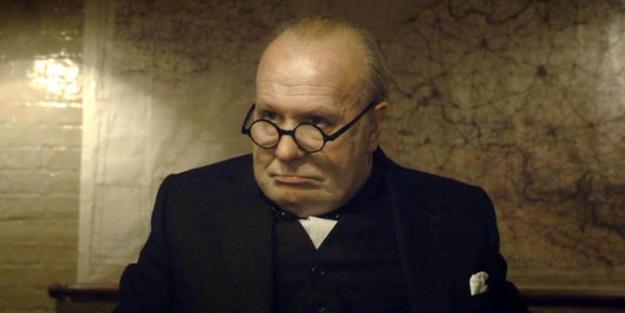 We finally got in to see “Darkest Hour” at the Nickelodeon over the weekend — the first time we went it was sold out and we were turned away — and it was everything I’d hoped it would be.

It’s only running there three more days after today, so run see it before it’s gone. (I don’t know how long it will be at the mass-market theaters where it’s showing). And get your tickets online in advance — that’s what we did, and the place was packed for the 2 p.m. Saturday showing. I didn’t see a single empty seat. And the audience was apparently riveted. I was hungry, not having had lunch, but I told myself I wasn’t going to go for popcorn and a beer until I saw someone else do it. Nobody did — except a guy who was on the end of a row, and I was in the middle.

But that’s OK, the movie was great. Gary Oldman, as usual, was fantastic, and the makeup artists even more so. He really, really looked and sounded like Winston.

For someone like me who has always been very rah-rah-for-our-side regarding that conflict, it was very enjoyable because one is encouraged to cheer. I especially like the last line, uttered by Lord Halifax after Churchill has completely routed him and Chamberlain in the House of Commons. Doug probably won’t like that line — or the film itself — as much, since he dismisses Trump’s flaws as “just words.” The director has said, “It’s a movie about words and the power of words to change the world and change the course of history.”

Anyway, run see it and let me know what you think.