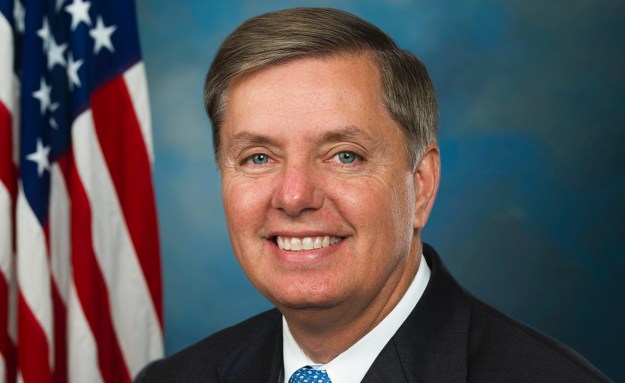 You were there, Senator. So what did the president say, and how did he say it?

Since some Republicans, after a day or two of thinking about it, started claiming Trump didn’t really say “s___hole” (hilariously, one of the lines of defense has been to claim he really said “s___house“) it’s refreshing that Lindsey Graham has stuck to his original version of the story, as Andy Shain reports:

.@LindseyGrahamSC has a different version of what happened in the Oval Office – and he’s sticking by it https://t.co/tbx8BaOiuY https://t.co/4834GlrB1p

Trouble is, his original story remains vague and indirect. He seems to want to have his cake and eat it, too — to call the president out for his racist assertions without quite, you know, calling him out.

We know from colleague Tim Scott that Graham told him the media reports of what Trump said were “basically correct.”

And Graham has made sure that we know that he gave Trump a piece of his mind in response to, you know, whatever he said:

When Trump made the incendiary remark, Graham spoke up, telling the president that “America is an idea, not a race.”

“I tried to make it very clear to the president that when you say ‘I’m an American,’ what does that mean?” Graham said. “It doesn’t mean that they’re black or white, rich or poor. It means that you buy into an ideal of self-representation, compassion, tolerance, the ability to practice one’s religion without interference and the acceptance of those who are different.

“So at the end of the day, an American is a person who believes in ideals that have stood the test of time,” Graham added. “It’s not where you come from that matters, it’s what you’re willing to do once you get here.”…

Agreed, senator. But since people are standing up and saying Trump didn’t say what he said, it would be helpful if you’d be the truthteller and give us a precise account of what you heard.

As the late Howard Baker might have said, What did the president say, and how did he say it?