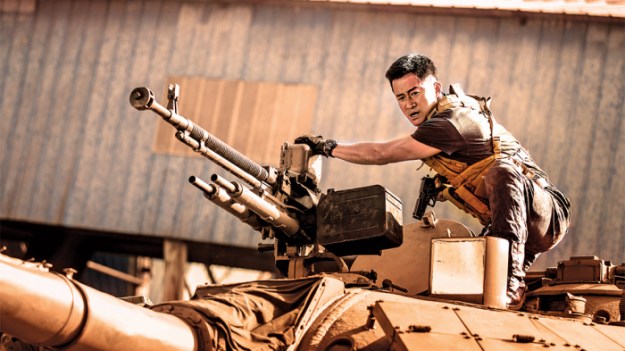 China’s Rambo: The piece in The New Yorker leads with the wild success of a new film, “Wolf Warrior II,” in which the Chinese hero flexes muscle abroad…

Last night, New Yorker journalist Evan Osnos was on Fresh Air, talking about his new piece in the magazine headlined “Making China Great Again.” The subhed of the piece is “As Donald Trump surrenders America’s global commitments, Xi Jinping is learning to pick up the pieces.”

No kidding. All the way home as I listened, my reaction was essentially “Duh!” I mean, everything he was saying about the way Trump has damaged U.S. standing in the world — and elevated that of China and others who can’t wait to fill the vacuum — was obvious. Anyone would know that this would be what would happen as a result of his “America First” idiocy.

Except, abundant evidence exists that this is not obvious to everyone. So I thought I’d share. And I learned a lot of details about how the predictable has actually played out. It’s particularly interesting to hear him talking about how Chinese leadership has figured out where all Trump’s buttons are, and manipulated him to their advantage at every turn.

Here’s the basic thrust of the New Yorker piece:

China has never seen such a moment, when its pursuit of a larger role in the world coincides with America’s pursuit of a smaller one. Ever since the Second World War, the United States has advocated an international order based on a free press and judiciary, human rights, free trade, and protection of the environment. It planted those ideas in the rebuilding of Germany and Japan, and spread them with alliances around the world. In March, 1959, President Eisenhower argued that America’s authority could not rest on military power alone. “We could be the wealthiest and the most mighty nation and still lose the battle of the world if we do not help our world neighbors protect their freedom and advance their social and economic progress,” he said. “It is not the goal of the American people that the United States should be the richest nation in the graveyard of history.”

Under the banner of “America First,” President Trump is reducing U.S. commitments abroad. On his third day in office, he withdrew from the Trans-Pacific Partnership, a twelve-nation trade deal designed by the United States as a counterweight to a rising China. To allies in Asia, the withdrawal damaged America’s credibility. “You won’t be able to see that overnight,” Lee Hsien Loong, the Prime Minister of Singapore, told me, at an event in Washington. “It’s like when you draw a red line and then you don’t take it seriously. Was there pain? You didn’t see it, but I’m quite sure there’s an impact.”

In a speech to Communist Party officials last January 20th, Major General Jin Yinan, a strategist at China’s National Defense University, celebrated America’s pullout from the trade deal. “We are quiet about it,” he said. “We repeatedly state that Trump ‘harms China.’ We want to keep it that way. In fact, he has given China a huge gift. That is the American withdrawal from T.P.P.” Jin, whose remarks later circulated, told his audience, “As the U.S. retreats globally, China shows up.”

For years, China’s leaders predicted that a time would come—perhaps midway through this century—when it could project its own values abroad. In the age of “America First,” that time has come far sooner than expected….

This is something I’ve worried about for a long time. One of the first editorials I ever wrote for The State, probably in January 1994, was about the way China was quietly insinuating its way into positions of influence around the globe, including in our own Monroe Doctrine backyard — Latin America. But at least for the next 23 years, we had leaders who understood why this was a problem (as we had my whole life), and were taking steps to counter it — such as with the Obama administration’s pivot to Asia, of which TPP was a critical part.

I never dreamed that we’d have a president who on Day One (OK, Day Three) would just trash it all, and invite China to jump in with both feet. Trump was so eager to do this that he even took a moment out of his busy first-week schedule of loudly proclaiming that his inauguration crowd had been the biggest ever.

And why does it worry me (one or more of my relativist friends will ask)? I always feel a little absurd having to explain it, but I feel a lot better living in a world in which the global hegemon is the planet’s greatest liberal democracy than in one dominated by the oppressors in Beijing. So should all of you who like to exercise your freedom of expression here on this blog. It’s that simple. Or rather, it’s that, and my belief that the rest of the world is better off with the U.S. playing the role China wants to play.

I recommend you listen to the radio interview and read the piece in The New Yorker. Then let’s discuss…