I saw this car in traffic this morning, and I though, Aha! Miami is in the Super Bowl! Now I won’t sound completely ignorant if someone brings up the subject! 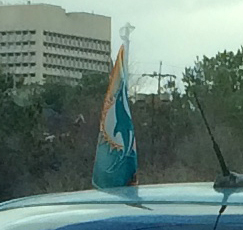 Like Tom Sawyer, I was proud I had found it out detective fashion; I wouldn’t give shucks for any other way — such, as, for instance, lifting a finger to look it up, which would have been against my principles.

Smugly, I made note to keep my eyes and ears open to see if I could passively learn who the other team was. (There’s pretty much always at least one other team involved in these things, you see.)

And then Bryan had to blow me out of the water with this comment.

Huh. The Eagles and the Patriots. OK. I stand corrected.

But… but… why was this guy flying the Dolphins flags, other than the fact that they went with the color of his car? Is it not customary among football fans to fly such flags on a day when their team is going to play, or in the days leading up to it?

The folkways of you people confuse me…

3 thoughts on “I thought Miami was in the Super Bowl. I read the signs wrong…”