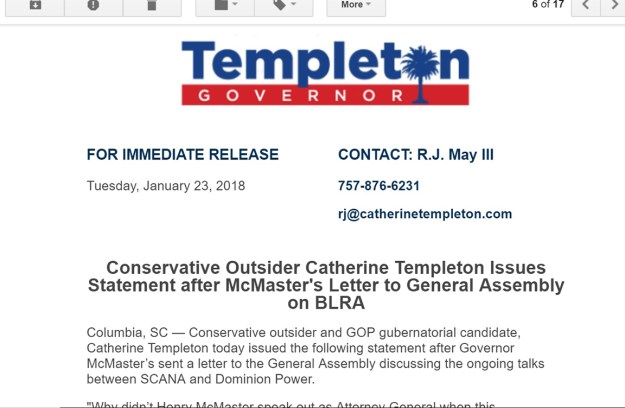 It’s now “Conservative Outsider Catherine Templeton.” I know this because headlines on releases from her campaign start out that way. (Or at least, two in row did. One more, and we’ll call it a trend and send it to Lifestyles.)

Which is weird. I mean, once you say all that mouthful, you’re about out of room for a normal headline, and you still haven’t gotten to a verb.

Consequently, when I see a release from her, I think I’m seeing the same one — but no, eventually I get to a word that’s different. It just takes patience.

Actually, I just looked again and realized the part that doesn’t vary a whit is longer than I initially thought. With these two examples, the release starts “Conservative Outsider Catherine Templeton Issues Statement” before it gets to a single word that varies.

This is an odd communication style. Usually, writers of releases seek to engage your attention way sooner. But the campaign seems to have decided that positioning her as “Conservative Outsider” is more important than actually saying something — more important even than her name.

Maybe going forward, they could abbreviate it to something like “ConOut Templeton…,” in the interest of moving things along and getting to the point. 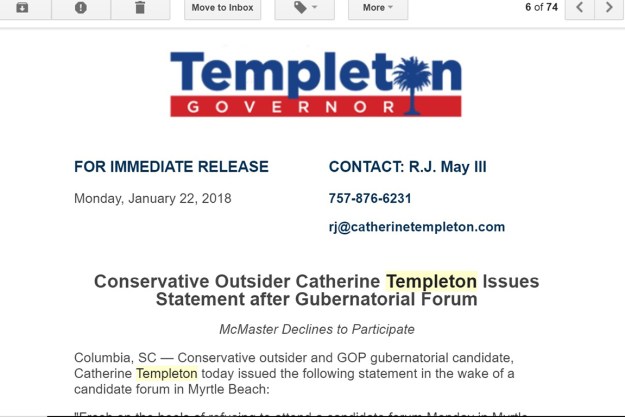 8 thoughts on “Latest Templeton releases have a déjà vu quality”