I don’t know what LIndsey Graham thought he was doing the last few months, building his new reputation as the “Trump Whisperer.” Did he think he could manage the grossly unfit POTUS, guiding him gently toward wise policy on immigration and making him think it was his idea?

Whatever his plan was, it didn’t work, and the moment that became fully apparent seems to have been the infamous “s___hole” meeting a week ago.

Now, he seems to have decided to concentrate his attention on actual grownups, people with whom he can have intelligent conversations and not feel the need to delouse afterward. He sent out this release yesterday: 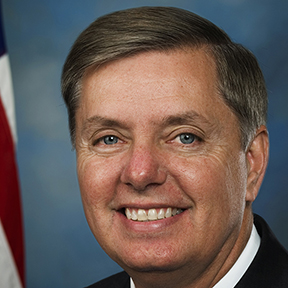 They will join Republicans Graham, Jeff Flake (R-Arizona) and Cory Gardner (R-Colorado) in backing this measure and working to protect Dreamers.

“It’s imperative that Congress act quickly so that young people who were brought to the United States as children, through no decision of their own, can stop living in fear of deportation.  I have talked with Dreamers living in Maine who have grown up in our State and have known no other country as their home,” said Senator Collins.  “This issue transcends political divisions, with members of both parties expressing sympathy for the Dreamers and support for a legislative solution.  I am proud to join this growing bipartisan group of leaders in advancing this important effort that will fairly address the needs of the DACA population, strengthen border security, and help improve our immigration system.”

“President Trump and the bipartisan members of Congress who met at the White House ought to be able to agree on a proposal that both secures our borders and provides a solution for DACA recipients,” said Senator Alexander. “I intend to support such an agreement which is why I’m cosponsoring the Graham proposal as a starting point for reaching consensus and will support other responsible proposals.”

“I am proud to be a part of this bipartisan solution for the Dreamers,” said Senator Murkowski. “We should not punish children for the actions of their parents. Those who were brought to this country by their parents, were raised here, educated here, lived here, and dreamed here, should be welcomed to stay here. They should have the right to work and a path to citizenship. Fulfilling that dream renews our American Dream. I have consistently cosponsored legislation to provide just that, and I am heartened to see so many diverse voices supporting a legislative solution for the Dreamers.”

“I thank Senator Graham and others for their commitment to strengthening border security and fixing our broken immigration system,” said Senator Rounds. “The current proposal is an important first step in more immigration reform that secures our borders and transitions to a merit-based system. Legal immigration is a proud part of our nation’s history, and today it plays an important role in our economy – including South Dakota’s own workforce which depends on temporary, H2B visa workers to fill jobs during the busy tourism and construction seasons. While this bill is not perfect, I will continue to work on a product that includes appropriate e-verify provisions, a stronger border security system and lays the framework for more reform, including work visas. These are the provisions required for me to support the bill in final form so we can get to the next phase, in which permanently increasing the cap of H2B visas will be a top priority for me.”

“I’m very pleased that our bipartisan proposal continues to gain support among my Republican colleagues,” said Senator Graham. “Our hope is to bring forward a proposal that leads to a solution the President can embrace. The goal is to begin fixing a broken immigration system by fairly dealing with the DACA population, securing our border, and moving toward a merit-based immigration system. This proposal would receive wide support and is a good solution for Phase I as we move to Phase II, comprehensive immigration reform.  As we debate how to fix a broken immigration system and who to allow to become an American, we must not change what it means to be an American.  As I’ve always said, America is an idea defined by its ideals – not by its people.  The idea of self-determination and freedom to speak one’s mind, to worship God as you see fit, and to be served by the government – not the other way around.  I believe there is bipartisan support for that concept.”

Highlights of the bipartisan proposal include:

They may not succeed, but at least he’s now working with people highly unlikely to disrupt a bipartisan meeting with an obscene racist rant…

11 thoughts on “Now you’re acting more like yourself, Sen. Graham”