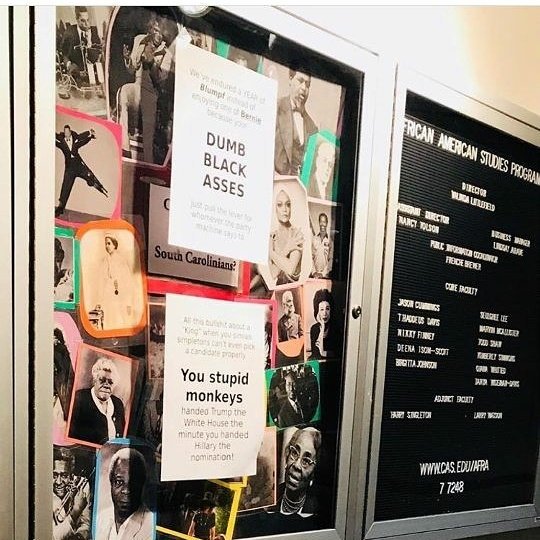 Racist signs found at USC./Photo from Twitter feed of @KingShady__.

Students returned to USC for the spring semester today to find racist messages taped up in several university buildings, including one on a display case outside the African-American Studies department in Gambrell Hall.

The precise nature of the messages was interesting. As the Charleston paper quoted:

“We’ve endured a YEAR of Blumpf instead of enjoying one of Bernie because your DUMB BLACK A**** just pull the lever for whomever the party (illegible),” one sign says in Williams’ photo.

“All this bull**** about a ‘King’ when you (illegible) simpletons can’t even pick a candidate properly,” a second sign says. “You stupid monkeys handed Trump the White House the minute you handed Hillary the nomination!”

So… is this the work of a Bernie Bro? Or someone trying to deflect blame and pin it on a Sanders enthusiast?

Whoever did it, it’s pretty disgusting.