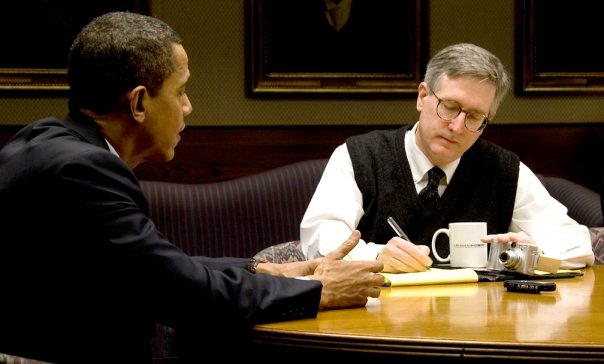 That’s me interviewing Obama on MLK Day 2008 — taking notes with my right hand, shooting video with my left. With my Initech mug: “Is This Good for the COMPANY?”

I retweeted this today…

Dr. King was 26 when the Montgomery bus boycott began. He started small, rallying others who believed their efforts mattered, pressing on through challenges and doubts to change our world for the better. A permanent inspiration for the rest of us to keep pushing towards justice.

I passed it on not because it was particularly profound or unique or even one of our former president’s better Tweets, but because it reminded me of a better time for our country.

As it happens, I met Barack Obama 10 years ago, on MLK Day.

That was such a better time for our country. 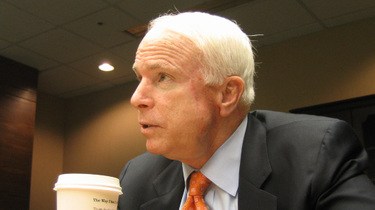 McCain in the same seat, not long before.

A week before, we had endorsed John McCain in the SC Republican Primary, and he had won. We knew, when Barack Obama came in, that we liked him for the Democratic Primary in a few days. But this interview, at 8 a.m. on that holiday, cinched it. We were all very impressed. And since Hillary Clinton declined even to come in for an endorsement interview (I would learn why sometime later) and Joe Biden had dropped out much earlier, that was pretty much it.

We endorsed Obama, and he won the primary a few days later.

As a result, I’ve never felt better about a presidential election than I did about that one — my last in newspaper journalism, although I didn’t know it at the time.

From the time McCain and Obama won their respective nominations, I referred to it as the win-win election. Whichever one won, I felt good about our countries future.

We endorsed McCain in the fall — I’d wanted him to be president since long before I’d heard of Barack Obama, and I was concerned about the Democrat’s lack of experience. But it was OK by me when the latter won. It was the win-win election.

Fast-forward eight years, and we find the Democrat we rejected then running against the worst candidate ever to capture a major-party nomination in our nation’s history — and as if that weren’t bad enough, the worst man won. And we are reminded of that daily, as he goes from outrage to outrage.

So it’s good, if only for a day, to look back and remember a time, not so long ago, when all our prospects seemed good.

30 thoughts on “Remembering a better time, just 10 years ago”