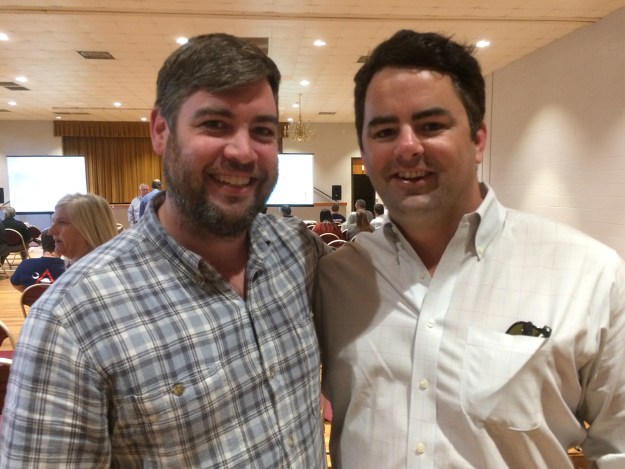 The Caskey boys, spotted together at an event in 2017. No, I don’t know exactly how they’re related…

Bryan posted this about his kinsman and my representative, Micah Caskey:

Guys like @MicahCaskey are why a representative republic is great. He can spend the time reviewing the details and let us all know what the deal is. That way, I can get the benefit of an educated opinion without doing the detail work myself. https://t.co/Txh72KPsFF

Yep, that’s exactly the way our representative democracy is supposed to work. Elected representatives are not your agents whom you send to do your bidding. They’re people you delegate to go do what, in a complex modern economy, most people don’t have time to do: Go to the capital and study and debate complex issues until they understand them better than they otherwise would — and then act accordingly.

A lot of Americans, maybe most of them, don’t understand that. They expect the following from elected officials:

I don’t expect those things at all. With me, it’s more like:

But as I said, too many people have the first set of expectations, and that misunderstanding has led to many of the ills our country is suffering today. The Tea Party and Trumpism were both outgrowths of the frustration of people who were mad because the people they had elected had not followed through on stupid promises they had made.

The danger in that, of course, is that you can arrive at a point at which people who will actually follow through on stupid promises get elected.

Which is where we are today…

Which is why a fine representative like Micah is good to find. Which in turn is why, once I met him and saw how bright, serious and thoughtful he was, I gave up my crazy thoughts of running for the office myself. I didn’t see how I would do a better job than he would. I don’t remember any of his positions in particular; I just remember that the way he approached issues made me trust him to address them wisely in the future.

And that, boys and girls, is how our system is supposed to work. And yes, this will all be on the final exam…

5 thoughts on “Yep, that’s exactly how a republic is supposed to work”