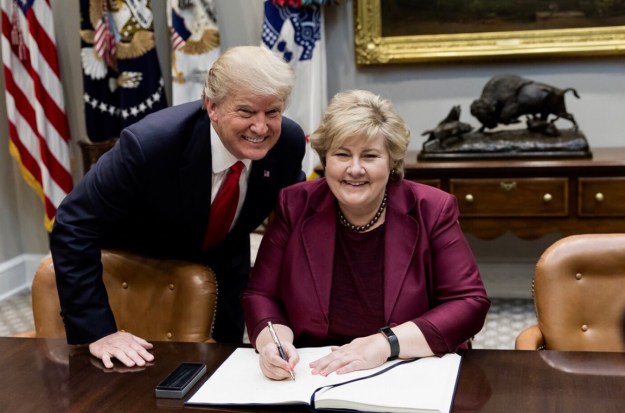 Yesterday, Trump welcomed the prime minister of Norway which, as he explained today, is NOT a “s__thole country.” I’ll bet she’s relieved to know that.

I’ve been so busy today doing actual work, I didn’t know what Bryan was talking about when he texted, “Would the president’s comment today violate your blog’s civility standard? Assume he was posting under his own name.”

So I went and looked, and the answer is “yes,” of course it would. It also poses a problem to newspapers across the country that normally don’t allow such language to foul their pages. The Gray Lady, The New York Times, refused to use it in a headline. The breaking bulletin on their site said ” Using vulgar language, President Trump said the U.S. should welcome immigrants from Norway, not places like Haiti or Africa.” And the headline after you get to the story said “Trump Alarms Lawmakers With Disparaging Words for Haiti and Africa.”

But the president of the United States said it, and it’s a newspaper’s job to report, so they held their noses and quoted him directly in the body of the story:

WASHINGTON — President Trump on Wednesday balked at an immigration deal that would include protections for people from Haiti and African countries, demanding to know at a White House meeting why he should accept immigrants from “shithole countries” rather than people from places like Norway, according to people with direct knowledge of the conversation.

Mr. Trump’s remarks left members of Congress attending the meeting in the Cabinet Room alarmed and mystified. They were there discussing an emerging bipartisan deal to give legal status to immigrants illegally brought to the United States as children, the people said, speaking on condition of anonymity without authorization to discuss the explosive proceedings of the private meeting.

When Mr. Trump heard that Haitians were among those who would benefit, he asked if they could be left out of the plan, according to the people familiar with the conversation, asking, “Why do we want people from Haiti here?”…

So I just violated my own policy, which is not to allow words that are unsuitable in a family newspaper. I didn’t like doing it. But then, I don’t like having this crude ignoramus as president of the United States, and stuff like this is one of the reasons why.

Being less prim, The Washington Post went ahead and used the word in their headline, since the word itself was half the story. That’s defensible, perhaps even laudable in these crass times in which we live.

The Guardian used it in the headline, but the Brits are less puritanical about words than we are.

The State used it in the headline, but good luck finding the story on the website — it’s not on the home page. (The Post and The Guardian are both leading with the story.)