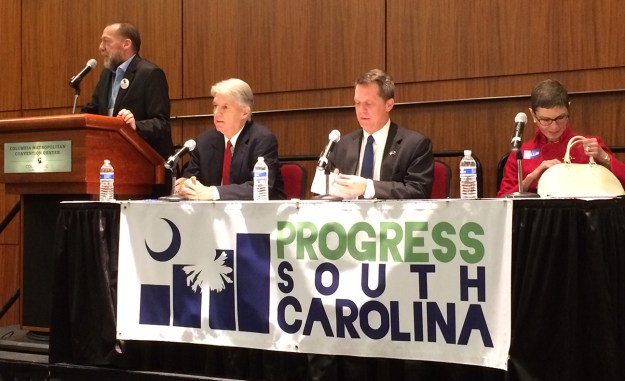 I went to the debate between the Democratic candidates for governor sponsored by Progress South Carolina Friday night, intending to blog about it. But the sound was so bad, and my notes therefore so incomplete and uncertain, that I blew it off.

But looking back, I think I can make a couple of observations. If you want more, or if you want to check my impressions, here’s a video of the whole thing. Bryan tried watching it in real time, and reported that “It sounds like they are underwater.” Which is the way it sounded in the Convention Center — loud enough, but mumbly. The good news is that the video available now sounds pretty good, especially with earbuds.

Here’s my main observation: I still don’t know why Phil Noble or Marguerite Willis is running, or what they hope to achieve. Oh, I can write down the words they say as to why they’re running, but I have trouble connecting those words to anything out there in the actual world.

The two of them seem locked in a bitter battle to see which one can be less likable. You’d think this campaign had been going on for years and they were sick to death of each other and of James Smith, to the point that they could hardly stand to be on the stage with each other.

Smith comes across as a guy focused on winning the election — the one in November, which hardly seems to be on the radar screens of the other two. He started his opening remarks with an upbeat, “Who here is ready to win an election? How about it?” Which prompted cheers, because that would indeed be a novel, exciting experience to this crowd. 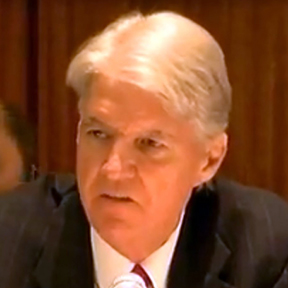 After a weird 12-second pause after moderator Bakari Sellers introduced him, Noble started off with a rambling, ticked-off, populist-tinged diatribe about South Carolina, starting in 1756, when his ancestors arrived. You can hear his tone on the video. At right you see his expression as he was telling this story. I got pretty lost in the story, along about the point where he went into detail about the curriculum of a school that folks like his ancestors started soon after their arrival. Lots of Greek and Latin, apparently.

In Noble’s world, our elected leaders haven’t failed to do what he wants because they disagree with him, but because they’re all “bought and paid for.” (Which is what I meant on a previous occasion when I said Phil is styling himself as this election’s Bernie Sanders.)

Ms. Willis, who had just gotten into the race that day, set her own tone by saying, “OK, let’s get right down to it. I’ve asked Phil Noble to drop out of this race.”

Noble’s response was along the lines of “Perhaps she oughta withdraw from the race!”

It was a “Yeah? And so’s yer mother!” moment that exemplified a tone that ran through the whole event. There have been times in the past when I have faulted my home state for being too polite. On Friday night, I was missing that politeness a bit.

The snapping wasn’t just between the two of them. For instance, after James Smith said some perfectly harmless things about how humbled and grateful he was for all the support he was getting from women across South Carolina, Ms. Willis replied with a sarcastic, “Well, let’s see how many of those eleven thousand women will still be with him when I tell you what I’m gonna do.”

Noble’s main shot at Smith came when he accused him of getting rating of 100 from the NRA, which Smith dismissed, defending his record of trying to reduce gun violence.

That moment sort of crystallized the point I mentioned earlier. Here we have a Democrat running with what would be an asset in the general election — a respect for gun rights, if Noble’s accusation were true — and that’s the beef his opponent has with him. From the start, Noble has seemed to justify his candidacy by accusing Smith of not being enough of a doctrinaire Democrat. He seems bent on making sure that the party nominates someone who can’t possibly win in the fall,

As for Ms. Willis… it will be interesting to see how many of those 11,000 women she can peel away from Smith in the coming weeks. That would seem critical to her chances, as she seemed to repeatedly put her self forward as the candidate for women. I don’t think she made a really strong start on that Friday night.

But y’all go watch it — you should be able to hear it better than I did at the time — and let me know what you think….

13 thoughts on “A brief, belated report on the Democratic debate”