EDITOR’S NOTE: I’m not going to take this down for now, because if I did, the post correcting it would make no sense. But for the record: The chief wasn’t talking about Meg Kinnard at all. Mayor Elise Partin thought he was, and reached out to me to tell me about it, which led to this erroneous report….

Earlier today, I got a Facebook message from Cayce Mayor Elise Partin, asking the following: “Brad, have you seen the FB post by our chief? I just saw your post about the reporter. Wanted to make sure you had both sides.”

I had not seen it, and at first I had some trouble finding it. But the mayor, on her way into a council meeting, called me back and told me where to find it — on the city’s public safety Facebook page (I had looked on hers, and the city’s, and the public safety chief’s personal page).

Here’s his essay, which I urge you to go read in its entirety. Here are the sections that caused the mayor to reach out to me:

These types of incidents are very dangerous and must be controlled quickly and effectively. The goal is to “Control the Chaos” by stabilizing the scene and caring for the victims. In order to do this, certain procedures and rules must be put into place. This includes procedures for the media to be able to have access to the information they need for their stories…. 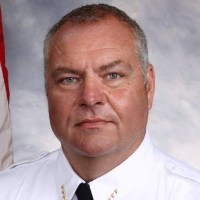 Again I feel that this incident ran very smoothly with so many entities involved and cooperating with each other. There are, however, a couple of tweets going out by a reporter about one of my staff making them leave the shelter and school district property. Let me make this very clear. The story is true! They were asked to leave because they were not abiding by the procedures that were put in place and were clearly explained to them and all the other media personnel that were at that location. By not staying within the boundaries that were outlined by my staff they were obstructing the flow of the operations at the shelter. They even attempted to get on a bus and do interviews with victims as they were leaving the shelter which slowed the process of the victims and their families getting where they needed to go. We received complaints on them from District 2 staff, victim’s families and even the bus driver of the bus that they attempted to gain access to. The procedures were made clear to them and they did not follow those procedures and when asked to stop they became aggressive with a school district official. They were, therefore, asked to leave.

I stated before that incidents like these are handled by “Controlling the Chaos”. Any disruption to this “Controlled Chaos” jeopardizes the operation and the care that the victims receive. I feel that cooperation between all agencies and emergency personnel in South Carolina is better than it has ever been and the way this accident was handled is proof of that. I feel the same way about our cooperation with the media. I respect the job they do and the fact that the media must sometimes be aggressive in getting the information they need for their story, however, ambush reporting and working outside of the boundaries and procedures that are put in place for an incident of this magnitude is simply unacceptable. So yes, they were asked to leave and I take full responsibility for the actions of my staff and, in this case, completely agree with them.

It may seem to some that the media outlets and Public Safety Agencies are often at odds with each other when it comes to information flow, however, it has been my experience that this is not the case and difficulties like these are rare. I would actually like to thank the media for the great coverage that they gave this major incident and for the needed information access that they provided to the public….

So there you have it. Frankly, I don’t think of this (or many things) in terms of “both sides.” There are lots of “sides,” multiple perspectives, on any event. I certainly didn’t see my earlier post featuring Meg’s video as one-sided, even though it was from her POV. I thought a fair-minded person could look at that video and feels sorry for Mr. Hinton trying to do his job while being chewed out by an angry reporter, just as much as a person who’s been there and done that (which I have, which of course colors my perspective) could identify with Meg’s frustration in trying to do her job. I think both of those things were true.

And I value the POV of the chief as well, and appreciate his presentation of his difference with Meg’s version within the context of an appreciation that the media folks there had a hard job to do, too.