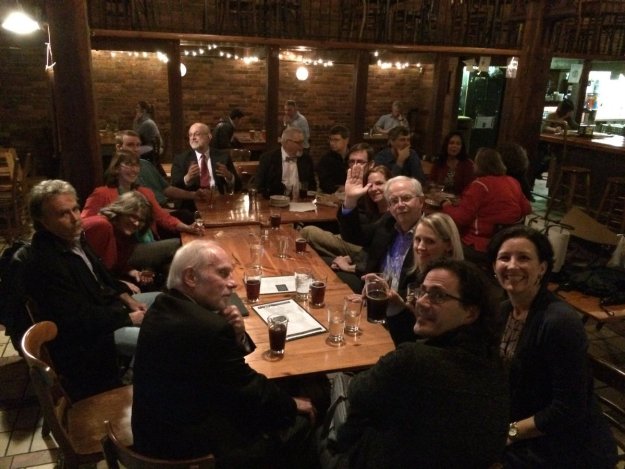 Valerie Bauerlein was back in town this evening, which became the occasion for the biggest gathering of former denizens of The State I’ve attended since we lost Lee Bandy.

Valerie, now of The Wall Street Journal, was here to deliver the Baldwin Lecture at the J-school at USC.

Her topic was “Retail Meltdown: How Online Shopping is Changing our Communities.” She did a  great job, as she does with everything she undertakes. To give you a sense of the lecture, here’s part of a Q&A with her from the USC website:

Last year I went to Elmira, New York, and Wausau, Wisconsin, to report on the ripple effects of the collapse of retail. What I saw there is not so different than what is happening at shopping centers in Columbia and in lots of other places.

Elmira used to make everything from typewriters to TV tubes. As manufacturing went away, the mall out by the interstate became a bigger and bigger driver of the local economy, drawing people from miles away and employing hundreds of people. The local governments became dependent on sales tax to offset property tax and other revenue as manufacturing declined. So when the mall started to fail, people lost their jobs and became more dependent on public aid. And the city had become so reliant on sales tax to make its budget, it had to make deep cuts, even in its police force. There are lots of communities like this, who are dealing with the death of a big mall or outlet center that has been an anchor for the economy.

Wausau, on the other hand, is a prosperous place, by some measures the most middle-class community in America. The mall is failing there, too, in spite of being the only one in a 70-mile radius. In Wausau, the city didn’t need sales tax to make its budget and the local governments could absorb the decline in property taxes from the mall and other shopping centers. The big worry there was the death of what had been a community gathering place, and how to get new life into a building that was in the center of town. The other issue was how to support small shops in the downtown, so the people would want to live and work there.

So there are fiscal and civic ripple effects to our communities from the collapse in retail that are fascinating and often overlooked….

I was a bit late for her talk, but she let me know that I was quoted in her introduction, delivered by Tom Reichert, the new dean of the College of Information and Communications. He used this from a 2009 post on this blog:

She’s one of the nicest, most pleasant, kindest, most considerate people I ever worked with, to the extent that you wonder how she ended up in the trade. Not that news people are universally unpleasant or anything; it’s just that she was SO nice. And very good at her job, to boot.

Yep, that sounds like something I’d say about Valerie — and mean it. Here’s how nice Valerie is — she gave a plug to my recent blog post related to her topic (the one on deserted malls).

Afterward, we went to Hunter-Gatherer for a pint. Which is where the picture above is from. That’s Valerie with the big smile in the foreground at right. You can also see Sammy Fretwell, Megan Sexton, Bob Gillespie, Paul Osmundson, Carolyn Click, Grant Jackson and various other present and former denizens of The State — plus such fellow travelers as ex-dean Charles Bierbauer, media lawyer Jay Bender, former Sanford press secretary Joel Sawyer and other friends.

It was good to see all the folks again…