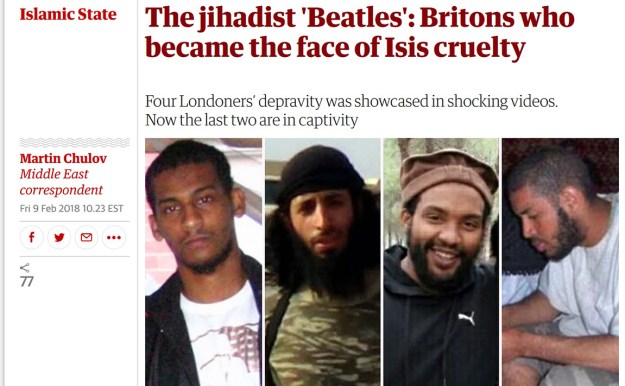 Flew in from Miami Beach BOAC
Didn’t get to bed last night
Stayed up putting Semtex in my BVDs
Man I had a dreadful flight!

Sorry. I suppose that’s in poor taste. But I didn’t start it. It’s the British press that’s calling these four terrorists “the Beatles:”

Exhausted and strikingly different in appearance from the other captives, the two new prisoners were believed by Kurdish militia leaders to be among Islamic State’s cadre of foreign fighters.

But it was not until mid-January, around one week after their capture in eastern Syria, that the Kurds – and their CIA colleagues at the interrogation centre where they were holding the prisoners – knew exactly who they had: Alexanda Kotey and El Shafee Elsheikh, Britain’s two most wanted terror suspects. They had finally been caught – and they were ready to talk.

Kotey and Elsheikh are the final two of an infamous quartet of Britons who acted as jailers, torturers and executioners of foreign aid workers and journalists for more than two years from mid-2013. They were dubbed “the Beatles” by their victims, in reference to their British accents – though they were from London, rather than Merseyside…

I used to have pleasant, light-hearted associations with the Fab Four. Now this…

3 thoughts on “The ‘Jihadist Beatles?’”