Conservative Outsider and Republican Gubernatorial candidate Catherine Templeton (which I’ve come to think of as her full legal name, based on her campaign’s releases) is talking tough on guns again:

“I’ll be on the Bobby Mac show on 106.3 WORD radio at 5:07 pm today to discuss tomorrow’s statewide school walkouts. They’re designed to push the liberal gun control agenda. As your Gov, I won’t allow our children to be used as political pawns for the Left. Tune in tonight!”

Yeah, those darned kids, lacking the gumption to stand up for their God-given right to get gunned down in geometry class…

Anyway, guns are kind of a theme for her at the moment.

Over at the Greenville paper’s website, you can find video of her squeezing off a few rounds at a local range.

She’d better hope folks only watch the video, and don’t read the story that goes with it. An excerpt:

In a campaign ad posted online last week, Republican candidate for governor Catherine Templeton said she “ruffled so many feathers” after starting work for former Gov. Nikki Haley in 2011 that state law-enforcement officials grew concerned for her safety.

“The State Law Enforcement Division actually called and said, ‘Catherine, we need you to get a concealed weapons permit; we need you to start carrying, and we need you to protect yourself because of you’ve made a lot of people mad,'” Templeton says in the ad.

South Carolina Law Enforcement Division spokesman Thom Berry said he could find no evidence that his agency told Templeton to obtain a concealed-weapons permit or carry a gun.

“It is not our practice to tell, instruct or order a person to obtain a concealed-weapons permit,” Berry said in response to questions from The Greenville News and Independent Mail….

Both SLED Chief Mark Keel (through Berry) and his predecessor Reggie Lloyd deny having made such a recommendation to her.

Berry confirms that she did take a concealed-weapons class organized by SLED in 2011, along with some court officials.

Which makes this part even more embarrassing:

Before Monday’s interview, Templeton took a .38-caliber handgun that belonged to her grandfather out of her purse at the gun range. As two campaign aides, a photographer and a reporter watched, Templeton tried to fire the weapon several times but it repeatedly malfunctioned…

But there’s a happy ending for this campaign’s pistol-packin’ mama:

Using another .38-caliber handgun provided by an employee at the business, Templeton struck a body-shaped target in the head and chest with several shots.

That’s in the video. After which, she says of the man-shaped target, “Yeah, he’s done…”

No, it’s not Ted Cruz makin’ machine-gun bacon, but she does what she can… 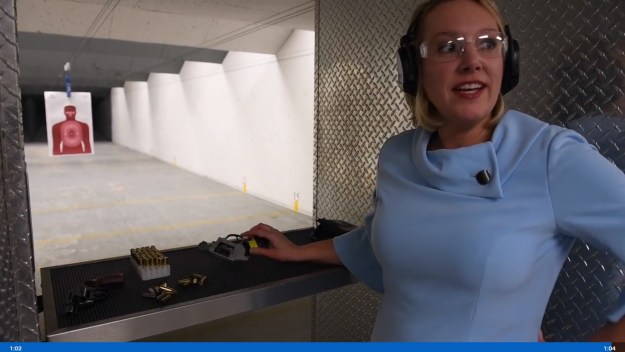