WASHINGTON – U.S. Senator Lindsey Graham (R-South Carolina) today made this statement on reports of negotiations between North and South Korea in an effort to denuclearize the Korean peninsula.

“If there is an agreement reached between the United States, North Korea and the rest of the world regarding the denuclearization of the Korean peninsula, the lion’s share of credit will go to President Trump for his strong stand.

“President Trump has been steadfast in his commitment to deny the North Korean regime the ability to strike the U.S. with a nuclear weapon.

“I hope the strong and unequivocal position by the President will lead to a major breakthrough that would be beneficial to the world at large.”

You know, you’d think a guy like Graham, with his experience in foreign affairs, having been around a foreign policy establishment that has worked, soberly and diligently, to contain North Korea and its nukes over the past decade, would know better than to give all the credit to the guy who pumps out stuff like this: 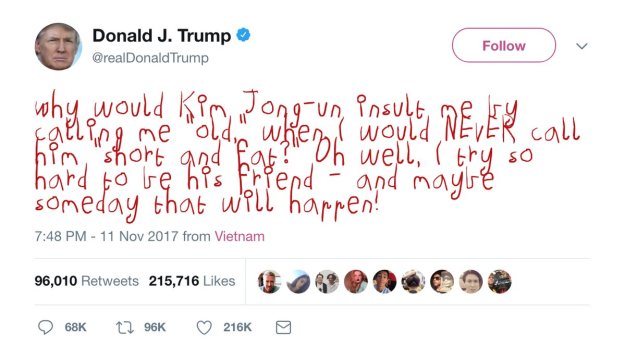 Have some pride, senator….