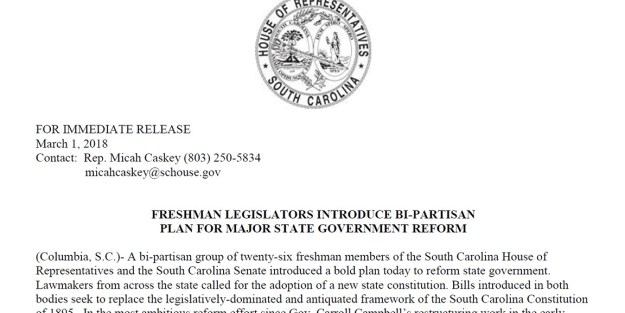 I got this release today from my representative, Micah Caskey. I’ve told you he’s been pretty bold — in good ways — for a freshman. Now, he’s outdone himself — and brought a bunch of other frosh along with him.

They’re calling for no less than a constitutional convention to address the deep structural problems in our form of government in South Carolina. Here’s the main thrust of the release:

A bi-partisan group of twenty-six freshman members of the South Carolina House of Representatives and the South Carolina Senate introduced a bold plan today to reform state government. Lawmakers from across the state called for the adoption of a new state constitution. Bills introduced in both bodies seek to replace the legislatively-dominated and antiquated framework of the South Carolina Constitution of 1895. In the most ambitious reform effort since Gov. Carroll Campbell’s restructuring work in the early 1990s–and the first such endeavor led by the legislature–the plan unveiled today will result in an improved, more transparent, and more efficient state government that is accountable to the people. 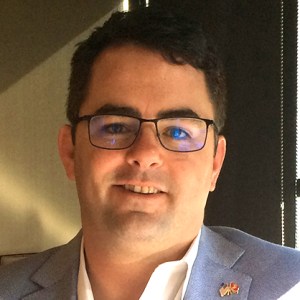 The 1895 Constitution, the seventh in South Carolina history, was notoriously borne out of “Pitchfork” Ben Tillman’s explicit motivation to elevate the power and influence of white South Carolinians at the expense of black citizens. The resulting state government structure diffused responsibility throughout the General Assembly and subjugated the executive and judicial branches of government to the legislature. The legacy of Tillman’s effort continues to shackle us today.

The bills introduced today propose a ballot referendum for South Carolina’s citizens to call only for a state constitutional convention; this process cannot in any way, whatsoever, limit the freedoms and liberties guaranteed under our United States Constitution….

The problems are basically the same ones I — and a large portion of The State‘s then-considerable newsroom — addressed in the huge “Power Failure” series in 1991 (tagline: “The Government that Answers to No One”), when Micah and many of these other folks were in grade school, (if that old). But the diagnosis didn’t originate with me or Cindi Scoppe or any of the others on the Power Failure team. Some of the main remedies we wrote about then had been recommended by one blue-ribbon panel after another since about 1945.

Micah, et al., are proposing to go a step further, calling a con-con. I always stopped short of that, because anything could happen in one of those, depending on who the delegates are. A convention could come up with proposals that make things worse, so I’ve always been leery.

In fact, my original idea for Power Failure came from a series of op-eds written by Walter Edgar and Blease Graham in 1990, in which they did advocate a convention. But I still preferred to advocate “do this, specifically” to lawmakers, rather than having them call a convention and see which way they went.

But maybe it’s time. After the partial restructuring of 1993 after our series (and with Gov. Campbell pushing it hard), reform has languished, although every few years we’ll get a small additional piece — for instance, we’ll be enacting another bit of it when we elect the lieutenant governor on the same ticket as the governor (if the General Assembly ever figures out the rules).

Several years back, Vincent Sheheen suggested taking the plunge, and even then I worried about buying a pig in a poke. But South Carolina needs fundamental reform, and it’s been so long, so maybe it’s worth the risk now.

I’ll watch with interest to see how their elders respond to this call for deep and needed change.

28 thoughts on “Micah and the freshmen take on Power Failure, big time”