This is just a by-the-way thing, for people who haven’t picked up on it…

The Washington Post yesterday had this story headlined, “Archaeologists discover 81 ancient settlements in the Amazon.” It said in part:

Fifty years ago, she said, “prominent scholars thought that little of cultural significance had ever happened in a tropical forest. It was supposed to be too highly vegetated, too moist. And the corollary to those views was that people never cut down the forests; they were supposed to have been sort of ‘noble savages,’ ” she said.

“But those views have been overturned,” Piperno continued. “A lot of importance happened in tropical forests, including agricultural origins.”…

Though conservationists often speak of this region as having been a “pristine” landscape, studies by de Souza and others suggest that indigenous people influenced and enriched the rain forest for hundreds of years….

Surprising? Only if you indeed think of the pre-Columbian Americans as “noble savages” who barely touched the land they lived on.

But in fact, researchers have been debunking that view for years.

If you haven’t read 1491: New Revelations of the Americas Before Columbus by Charles C. Mann, you should. That 2005 book, followed six years later by the equally fascinating 1493: Uncovering the New World Columbus Created, endeavored to bring us laymen up to date on what modern researchers were learning about this hemisphere before Europeans came to stay.

It’s been several years since I read it, but I remember two main points, new things, that I learned from it:

I may be misremembering a detail or two, since it’s been 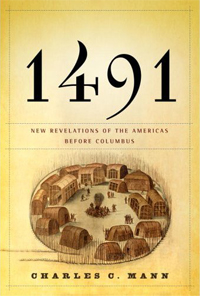 awhile since I read it. But I think I have the broad outline right. One of the most dramatic assertions I remember from the book was that the Little Ice Age the planet experienced from the 16th to the 19th centuries was at least in part caused by this sudden drop in human population in the Amazon basin, which allowed the rainforest to surge, taking in more carbon dioxide and lowering global temperatures.

Of course, this debunks one notion many tree-huggers are fond of — that the awful, heedless white man is destroying the planet by killing the rainforest, which the nature-loving folk who went before would never have done. (Or, if it doesn’t debunk it, at least adds layers of complication. Apparently, the Indian methods were more sustainable.) At the same time, it reinforces the idea that what humans do and don’t do affect global climate.

All of which reinforces my long-held belief that life is more complicated than most people give it credit for being.

I know I’ve recommended this book before, but the Post story reminded me of it, so I’m recommending it again. It’s fascinating to learn that things you thought you knew were so, are not…

15 thoughts on “The Amazon rainforest was shaped by people”