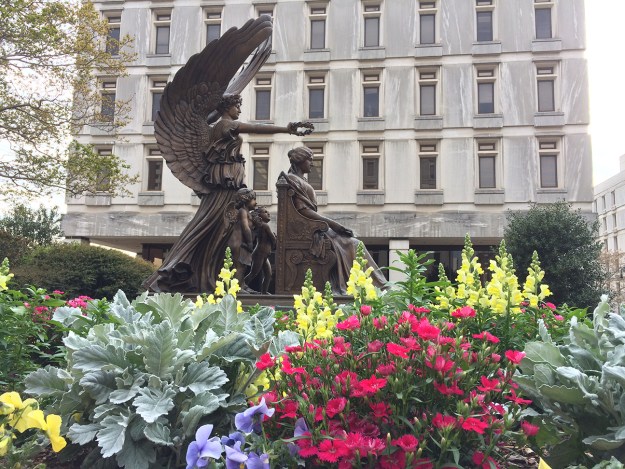 As part of my daily walking regimen, I had probably passed by it scores of times over the last few months, but never turned my head at the right moment to notice it — which is weird, because once you notice it, it’s hugely imposing.

I’d missed it because if you’re walking up the concrete incline from Pendleton toward the State House, you can’t see it until your eyes are at the right level, and if you don’t look more than 90 degrees to your left at that precise instant, it’s behind you. (When I took the shot above, only my head was higher than the base of the statue.)

Yesterday, the freshly-planted (I think) flowers caught my eye first, and as my eye rose above them, I saw the monument.

It’s so huge and elaborate, it’s kind of startling when you first see it, so close by.

I looked it up when I got back to the office, and found this page, which told me:

The Monument to Confederate Women, called Angels of the Confederacy, was erected in 1912. The sculptor was Frederick W. Ruckstull. The inscription on the northwest side reads: “In this monument, generations unborn shall hear the voice of a grateful people testifying to the sublime devotion of the women of South Carolina in their country’s need. Their unconquerable spirit strengthened the thin lines of gray, their tender care was solace to the stricken. Reverence for God and unfaltering faith in a righteous cause inspired heroism that survived the immolation of sons, and courage that bore the agony of suspense and the shock of disaster. The tragedy of the Confederacy may be forgotten, but the fruits of the noble service of the daughters of the South are our perpetual heritage.”

The cult of the Lost Cause ran to flowery exaggeration, didn’t it? But of course, that was the style of the time. And what was being described was something that stirred strong emotions.

The really sad thing about it, though, is that the real tragedy escaped the practitioners of this faith. It escaped them, and in some cases yet escapes some among us, that all of that suffering, which was entirely real and even awe-inspiring, was in the service not of a “righteous cause” but of its opposite. The ultimate tragedy is that South Carolina and the other states started the whole thing, causing so many to suffer, to defend the institution that was the central evil of our history.

In other words, it would have been extremely helpful if that “faith” had been less “unfaltering.”

But it wasn’t, and our collective psyche as a people was further scarred by what happened as a result… 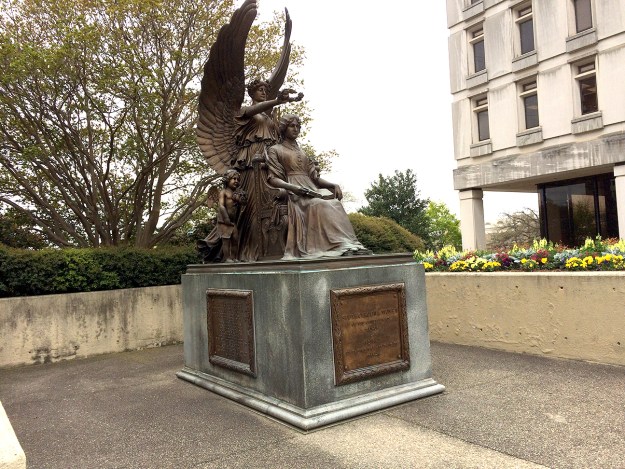 Another angle so you can see the base, and know how massive this thing is.

9 thoughts on “The State House monument to Confederate women”