Remember this bit of narration at the start of Johnny Dangerously?

Immigrants poured in from all over the world, looking for a better life. Over 97 percent of them settled in a two-block area of New York City. There was a law that said that immigrants who wanted citizenship… had to stay out of their apartments and walk around the streets, with hats on.

Well, apparently at about that same time or a little earlier — say, the 1890s — there was a law even more strictly enforced than the one about hats, and it didn’t just cover immigrants.

It just struck me the other day that all four of my great-grandfathers had rather prominent mustaches (above). There was a serious lack of variety in approaches to grooming at that time. None of them had beards, none were clean-shaven — just big, sometimes carefully waxed, mustaches. I conclude that that was the heighth of fashion in South Carolina and Maryland. 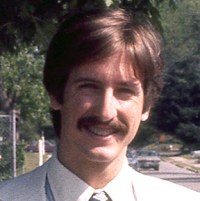 But wait — it was the case in Tennessee, as well, as I see from the three out of four of my wife’s great-grandfathers that I have pictures of (below). Maybe it was a federal law.

For a time — throughout the ’70s — I followed my forebears’ fashion lead, as you can see at right.

It’s a silly little detail, but I wonder — was there ever another time in which men’s look was that standardized?