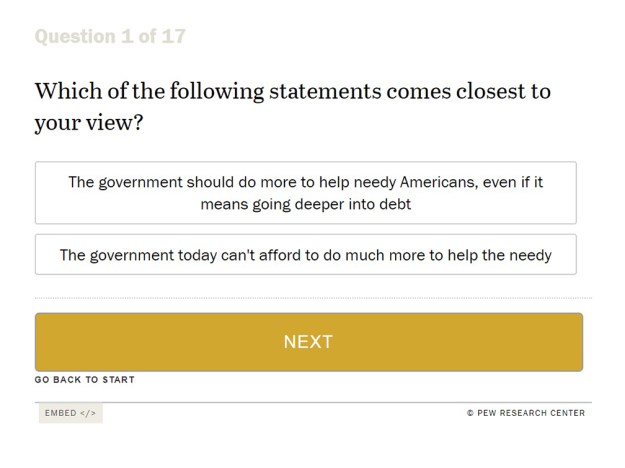 Remember the Pew political typology quiz of a few years back? It was an attempt to classify people by their actual beliefs, getting beyond simple “left” and “right.”

It posed a lot of questions with only two answers and both of them wrong, but I found it intriguing. It placed me in what it called the “Faith and Family Left.” That bugged me because I didn’t like the “left” part — but I thought the “faith and family” part was fair enough. In fact, I liked it. And how often are any of us comfortable with the ways others describe us? Here’s how that category was described:

The Faith and Family Left combine strong support for activist government with conservative attitudes on many social issues. They are very racially diverse – this is the only typology group that is “majority-minority.” The Faith and Family Left generally favor increased government aid for the poor even if it adds to the deficit and believe that government should do more to solve national problems. Most oppose same-sex marriage and legalizing marijuana and most say religion and family are at the center of their lives. Compare groups on key issues.

Sounds kind of like me, doesn’t it? Even though it’s the group with the highest percentage of African-Americans (I joked at the time that Pew thinks I’m a black preacher) and I’m the whitest white boy at Bypass High, it felt more or less right. I chafed at some of it, but not all.

But Pew has a new typology quiz now, and I hate it. (Actually, it’s relatively new. I tried last year and hated the results so much I didn’t even write about it. Today, I decided to give it another chance, but it came up with the same stupid answer.) The questions demanding one of two wrong answers are even more egregious, and I simply refused to answer some of them. Which means Pew assessed me on the basis of incomplete information. And this time, it decided I was one of the “New Era Enterprisers,” which right off sort of makes me want to gag.

This relatively young, economically conservative, Republican-leaning group tends to be relatively moderate on immigration and views about America’s engagement with the rest of the world. Most say U.S. involvement in the global economy is a good thing and that immigrants strengthen the nation. As is the case with other GOP-leaning groups, a majority of New Era Enterprisers reject the idea that racial discrimination is the main reason many black people are unable to get ahead. Nearly two-thirds favor societal acceptance of homosexuality. New Era Enterprisers are less critical about government than other Republican-leaning groups.

Really? “This relatively young, economically conservative, Republican-leaning group?” I try to picture that person, and I see John Dean before he started ratting out the Nixon White House. And if I were really a member of this group, I would have little memory of Howard Dean, much less John.

OK, yeah, I favor engagement in the world. But doesn’t that make me more of an old school postwar internationalist? More of a John McCain type? Or a Scoop Jackson, among the Democrats? And yeah, I’m less critical about government — but how does that put me in this group?

The only way it fits, overall, is that this category seems to be less ideological all around.

Pictured above and below are two of the questions I refused to answer. How could I?

Of course the country can do more to help the needy — such as passing single-payer. And it does NOT have to go further into debt to do it. False choice.

The one below is worse. I don’t think racial discrimination is “the main reason” many black Americans have trouble getting ahead. Nor would I for a second say that folks trapped in multigenerational poverty are “mostly responsible for their own condition.” There are many forces that can frustrate a poor person’s best efforts, and to say racism is “the main reason” is to blind yourself to all the others.

Anyway, I don’t have time to think about this any more. I need to run out and start a tech company and make a billion dollars. Because that, apparently, is the kind of young fella I am. A New Era Enterpriser. Sheesh… 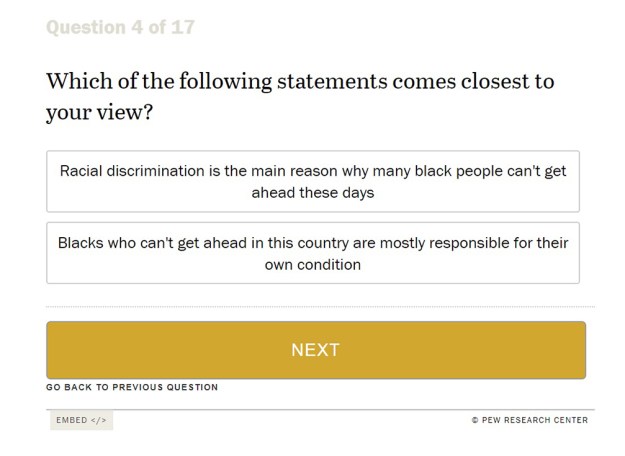