Yes, that headline is a blast from my past, from my earliest blogging days, when I looked at this picture of some Michael Jackson fans waiting breathlessly for news of a verdict in his 2005 trial on child molestation charges. 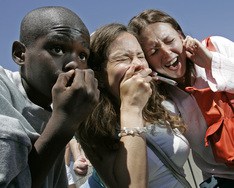 I didn’t get it then, and I don’t get it now. Yeah, I can understand someone liking the guy’s music, and being amazed by his dance moves earlier in his career.

But to care about somebody you don’t even know to that degree? How do people get to be that way? What is missing in people that they try to fill the void with celebrity worship?

Anyway, I was reminded of it after running across one item after another about an allegedly (I can’t seem to find video of it, so I can’t confirm its awesomeness) awesome performance by Beyoncé over the weekend. The web is filled with headlines such as “Beyoncé makes history at Coachella” and “What It Was Like to Be in the Audience for Beyoncé’s Historic Coachella Show.”

In my effort to understand this no doubt amazing event, I first had to look up “Coachella,” because I had never heard of it before — something that amazes my wife, by the way, but there it is. To me, it sounded like a name the Disney people would give to a wicked stepmother/sorceress sort of villainess. Like “Cruella De Vil.”

I’m hip. I’m with it. I’ve heard of Bonnaroo. But this was a new one on me. So I’ll just have to take others’ word for how “historic” — how like Caesar crossing the Rubicon, and the 13th Amendment, and the Yalta Conference — this event was. I am, however, willing to learn — if someone can direct me to video of the lady’s stupendous performance.

It would have to be historic, for onlookers to wear expressions such as these (sorry about linking to it rather than showing it, but I can’t afford Getty’s prices). Those folks look like they are witnesses to the Transfiguration, and are as overwhelmed and addled by it as Simon Peter was. (I found that picture on an NYT piece headlined “Beyoncé and the End of Respectability Politics,” which I was tricked into reading by the fact that it was in the Opinion part of my NYT app.)

Someone will no doubt point to some cultural touchstone from my own youth, and say something like, “Look at how audiences reacted to the Beatles!” But that will not score many points, because — while I think the Beatles were great, unique, unprecedented, even historic (or at least historical) — I always thought the screaming-teenybopper phenomenon was ridiculous, too. It was… uncool.

But aside from having never been a teenage girl, I think maybe I just was never really young in that sense. My wife will back me up on this, since she’s known me since I was 19. (Alla you kids get offa my lawn. And get a grip on yourselves.)

But seriously: What makes people get so worked up by entertainers and other celebrities?

9 thoughts on “Again, what is WITH people who worship celebrities?”