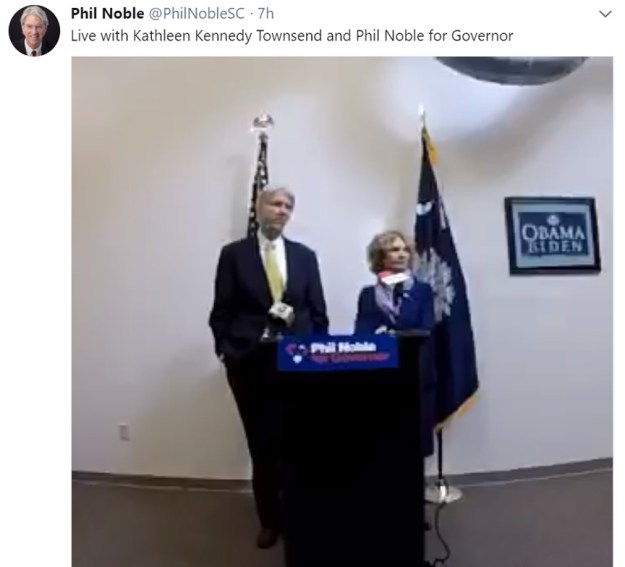 It’s kinda fun that there’s an Obama-Biden sign in the background, since Biden has endorsed James Smith…

Phil Noble has pulled off another coup, by the standards of his campaign — touting the endorsement of yet another person who can’t vote in South Carolina:

One candidate to be South Carolina’s next governor is touting a 50-year-long Kennedy connection with his latest endorsement.

“For years, I’ve watched Phil fight tirelessly for the causes and concerns that have long inspired my family’s commitment to public service,” Townsend said….

First Doug Jones in Alabama, now a member of the extended Kennedy clan. And again, the support arises from old family connections, rather than anything Phil Noble has done.

But wait… there are those two guys in South Carolina who have endorsed him. Which means exactly half of the people endorsing him can actually vote in this state, unless I’ve miscounted.

There have to be other people, right? But I haven’t run across them. Of course, one might ask the same thing about Marguerite Willis, although we know who her chief backer is — Marguerite Willis. She’s has kicked in $460,000 of her own money.