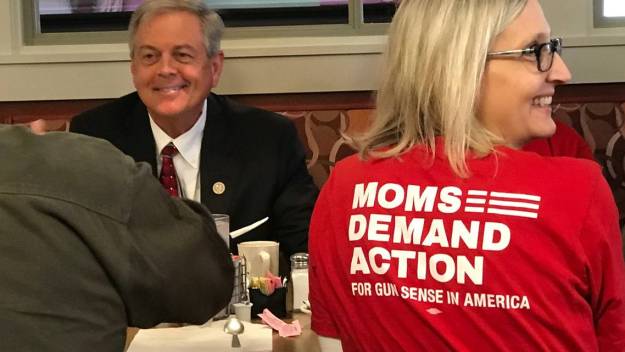 Norman during the meeting with constituents…

If you’ve seen “In the Line of Fire” as many times as I have, you’ll remember this part. Clint Eastwood and his partner are trying to track down would-be assassin John Malkovich, and are following a lead that takes them into the subculture of plastic modelers.

They’re talking to a friend of Mitch, the Malkovich character, who says see my expensive wheelchair? Mitch bought it for me. Then suddenly, he pulls out a semi-automatic handgun and says this is in case Mitch ever comes back — because he had credibly threatened his “friend’s” life.

The Secret Service agents sort of go “Whoa!” at the appearance of the gun. They do this not because they’re sissies who are afraid of firearms and other mean things. (Remember, one of them is Clint Eastwood.) They do it because there are times when it is uncool to whip out a loaded firearm, and one of those times is when you’re being interviewed by a couple of worried Secret Service agents.

Another such time is when you’re a member of Congress chatting with your constituents.

What I’m saying is that basically, Ralph Norman did a really, really uncool thing when he took out his piece and put it on the table during a meeting with voters.

He didn’t do a criminal thing — at least, not to my knowledge. And I don’t think anyone needs to have a cow over it the way Democratic Party Chair Trav Robertson is doing.

But it seems to me quite obvious that it fell way short on the cool-o-meter. 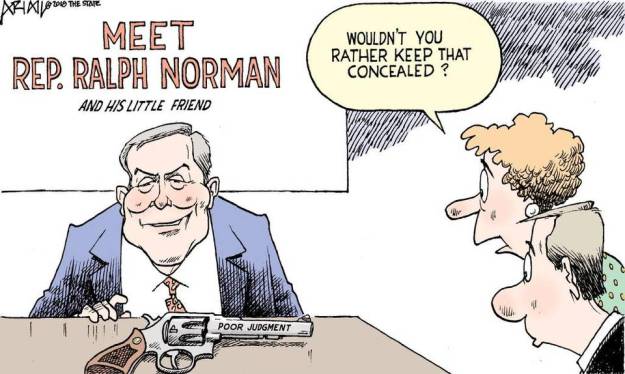