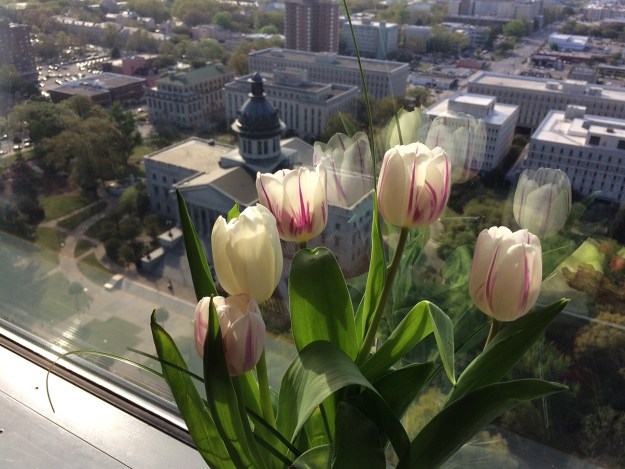 I’m having a busy day with little time for blogging, so I just thought I’d share a picture that I like.

This is what I saw from my table at breakfast Monday morning. They were left over from the Capital City Club’s Easter dinner the day before.

They struck me particularly because the night before, we had started to watch a new Netflix movie called “Tulip Fever.” It’s about the market bubble in tulips that drove Europe, and particularly the Netherlands, mad in the 1630s, before the inevitable collapse.

We didn’t make it all the way through — it started to devolve into one of those tiresome plots in which bad things happen because of mistaken identity. But I watched enough to learn that multicolored tulips like the ones above were called “breakers,” and were particularly highly prized. Or at least, that’s the way this film told it.

Of course, right after I took this picture, I moved the flowers so I could pull down the blinds so the sunlight wouldn’t blind me while I read the papers on my iPad.

Beautiful vistas are sometimes wasted on me… An image from the film, “Tulip Fever.”