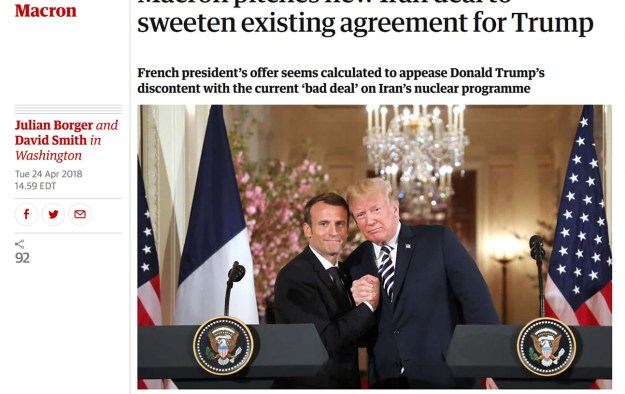 From The Guardian’s web page.

I was hearing on the radio about how fond of each other Trump and Macron are, and it sounded like the most ridiculous thing I’ve heard in a while.

I mean… Trump is the walking, talking embodiment of every ugly American stereotype that sets the Gauls’ teeth on edge, while Macron is so… continental. I mean, I’d pick the guy out of a lineup as the French guy, even if I’d never seen him before.

But now I see it must be true, based on all the kissing, hand-holding and other touching going on.

This is not the way a couple of straight guys usually interact. And, not that it matters, but we have every reason to believe they are straight, although the ways they relate to the opposite sex couldn’t be more different: Macron is married to a woman who’s older than his Mom, and Trump keeps trading in his wives for the latest model. (In fact, were you to see the four together, you’d be likely to assume Melania was Mrs. Macron and Brigitte was Mrs. Trump.) Which again raises the question: What on Earth do they have in common? I can’t imagine.

Why are these guys so fond of each other? Where is the advantage for either of them in the awkward buddy act? Is Macron working up to ask for the Statue of Liberty back? Do they need us to fight ze Germans again? 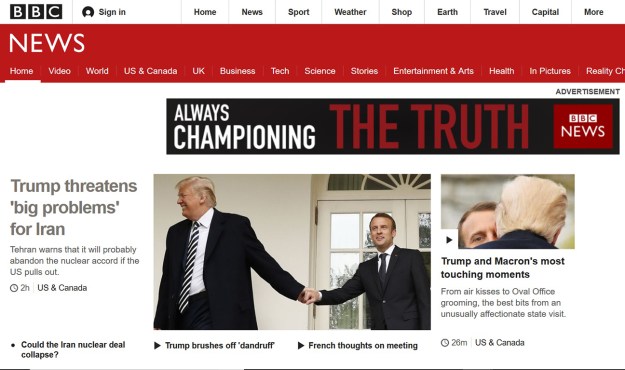 From the BBC web page.

6 thoughts on “Donald and Emmanuel, sittin’ in a tree…”