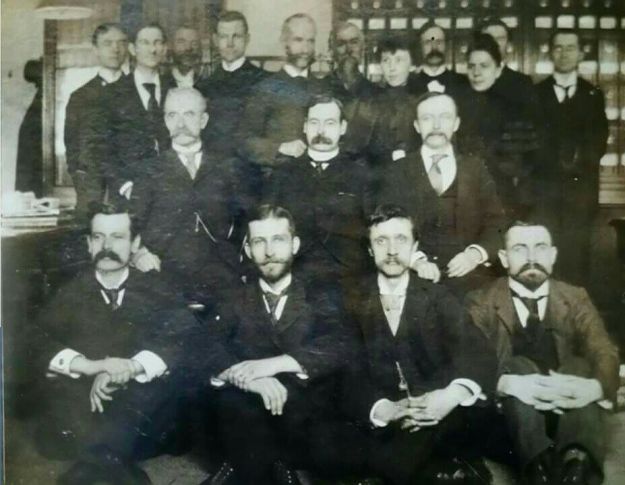 Remember my post about how all the men on my family tree in the late 19th century had big mustaches?

Probably not, since it drew no comments. Nevertheless, here’s a sequel.

One of my great-grandfathers, William Oscar Bradley, was an attorney who left South Carolina to take up a presidential appointment with the Treasury Department. (That’s how his daughter, my grandmother, ended up meeting and marrying my paternal grandfather. The Warthens were from Montgomery County, Maryland, and were the only part of my tree not from South Carolina.)

Anyway, one of my cousins recently posted this image on Facebook, labeling it “Treasury Department Law Office.” That’s my great-grandfather William O. in the center of the photo.

There’s no date, but obviously this was smack in the middle of the “everybody’s gotta wear a mustache” period.

And if you didn’t, male or female, you had to stand in the back of the picture.

Actually, I’m sort of guessing that it was a status thing based on something other than facial hair — maybe the seated guys in the front were the lawyers, and the folks in the back were the clerks who worked for them. Or maybe the people who arrived first for the photo got the seats. But I kind of doubt that. Surely if where you were in the picture meant nothing in terms of organizational structure, the gentlemen in the front would have given up their seats to the two ladies — right? I hope so.

I love old pictures. I wish I knew more about this one….

7 thoughts on “Everybody without mustaches stand in the back!”