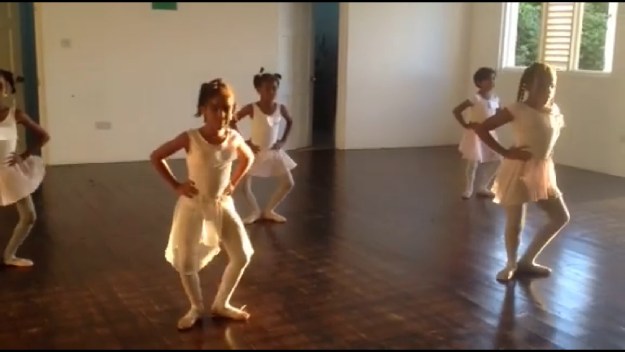 Still from a video of one of Becca’s classes.

Y’all know that my youngest daughter did a two-year Peace Corps tour of duty in Thailand awhile back, because we went to visit her and I posted about it. There, she did the usual kind of Peace Corps work, like something out of the movie “Volunteers,” only Tom Hanks and John Candy weren’t there to help her. She was way out in the countryside on her own, teaching such things as English and basic life skills in the local schools. She was the only farang for many miles around. When someone had an event and wanted to draw a crowd, they invited her to present the award or cut the ribbon or lead the parade, and people were sure to turn out, just to see the blonde foreign girl.

You may not know that before she was in the Peace Corps, she was a classical ballet dancer. She had spent her last year of high school in Pennsylvania training intensely at a respected school there, stayed another year after graduation, then came down to USC to study in its dance program. But some of her teachers persuaded her to leave school and turn pro. So she did, dancing with companies in both North Carolina and Columbia before having to “retire” because of injuries. She went back to school, to get her degree from College of Charleston, then joined the Peace Corps.

She had no way of knowing those two paths would combine in a unique opportunity.

After she had been back from Thailand a short while — she worked for a dance company in New York during the interval — she saw an ad for a position in the Peace Corps Response program. The island nation of Dominica in the Caribbean, a place with few economic advantages, wanted someone to teach its children to dance. With Peace Corps and professional dance experience, Becca — being uniquely qualified — got the job, and started in January 2017. 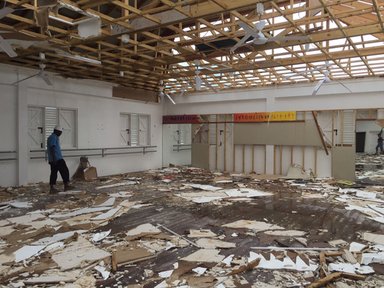 Everything went fine (here’s a piece Becca wrote about her work a year ago) until Dominica was hit by Hurricane Maria in September. There was no chance to evacuate ahead of time. As it bore down on the island, the storm started the day as a Category 1, and by landfall was a Category 5. Everyone knows what Maria did to Puerto Rico. But Dominica, a former French and then British colony before gaining independence in 1978, doesn’t get as much press. And Dominica was hit first — and harder.

Dominica was devastated. The island, which is rocky and mountainous and lacks the attractive beaches of some of its neighbors, had been building a bit of an ecotourism industry, but its forests were torn up by the roots, the trees littering the island. Agriculture was completely destroyed, plantations losing 100 percent of their crops. And practically no one had a roof that hadn’t been ripped open to the sky.

The almost 20 Peace Corps volunteers on the island had been summoned together to ride out the storm in a hotel in the city of Roseau. It was a harrowing experience. For days after, their only water was what had collected on the roof. Eventually, the Peace Corps hired some fishing boats to take them off and transport them to St. Lucia, from whence my daughter came home to stay with us a few weeks.

And then she went back. She was one of only five Peace Corps folks to return, and she did so at the particular request of local officials, who still wanted their children to have a chance at cultural enrichment.

Becca’s efforts have drawn some attention recently. Buzzfeed did a feature on her and seven other Peace Corps volunteers who were “Using Sports To Strengthen Communities Abroad.” Never mind that ballet isn’t exactly a sport, they had nice things to say anyway (mainly derived from the piece she wrote last year):

For Rebecca Warthen, ballet is everything that makes life worth living: beauty, romance, music, joy, passion, and physicality. So when she saw a Peace Corps Response opening for a ballet instructor and teacher trainer on the Eastern Caribbean island of Dominica, she applied immediately, hoping to change lives with the art form that changed her own.

Warthen said one of the best things about dance is that you don’t need expensive equipment. “All you really need is your body, space, and the desire to learn, and your future is yours to determine… More importantly, they’re learning something new from a culture different than theirs, from a person with a different skin tone and different background, and through that they will become more accepting, open-minded people, which is what this is all about, isn’t it?”

No, you don’t need much special equipment to dance, but you do need a place to do it. And the one dance studio in the country — the Dominica Institute for the Arts — had been destroyed in the storm.

Since her return, Becca has been teaching in the schools — those that remain — and other spaces as available. But she’s determined to restore the island’s one studio, a beautiful facility that had been donated by a Dominican who had had success in the wider world and wanted to give back.

Here’s a story on the Peace Corps website about her effort. It will cost a little more than $28,000. The people of Dominica, who don’t have much to give, have come up with $20,000 of it themselves. Becca is trying to raise the rest.

If you can, please help. You can give at the Peace Corps site. The people of Dominica, who want broader horizons for their children, will appreciate it. So will I. 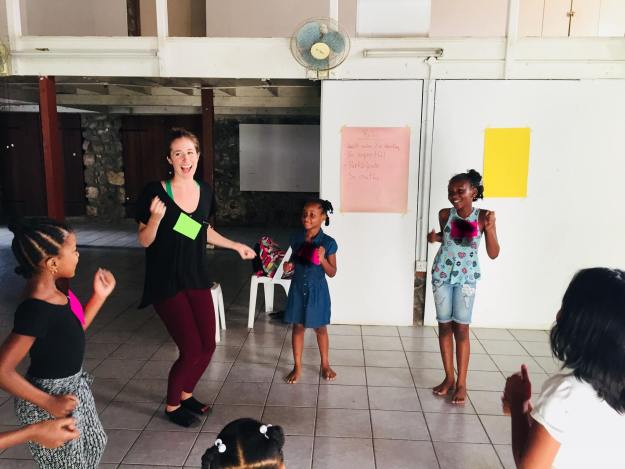 Becca and some of her students.