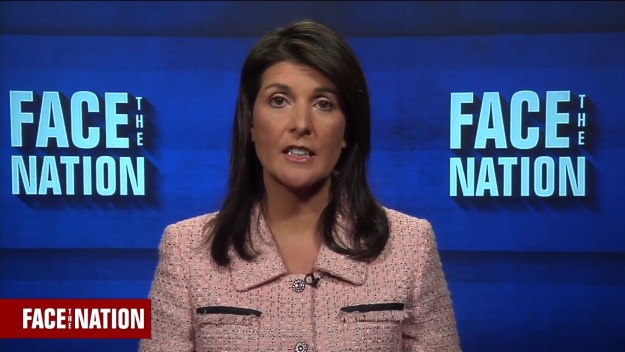 The Washington Post reported late Sunday that President Trump “has battled his top aides on Russia and lost.”

Less than 20 hours later, Trump has now reversed U.N. Ambassador Nikki Haley’s announcement that the United States would be ramping up sanctions on Russia.

The sudden reversal of Haley’s Sunday-morning announcement is hardly the only example of the right hand in the White House not always knowing what the left hand is up to. Trump often seems to be negotiating not just those around him but also with himself and has been unafraid of contradicting top aides and even Cabinet-level officials like Haley.

But on Russia and on an issue of such import, the quick reversal is stunning — and relatively rare. There is no clear indication whether Haley or someone else is at fault, but as The Post’s team notes, she has a tendency to clear her remarks with Trump personally before she makes them. It seems entirely possible that she got Trump to sign off on saying more Russia sanctions were coming on Sunday morning, and then the White House got cold feet (possibly because Trump suddenly felt the need to exert himself over the process)….

Remember, Nikki, you’re working for a 2-year-old — and one who thinks Vladimir Putin is one of the cool kids…

3 thoughts on “Nikki Haley needs to remember that she works for Donald Trump, who won’t back her up — especially on Russia”