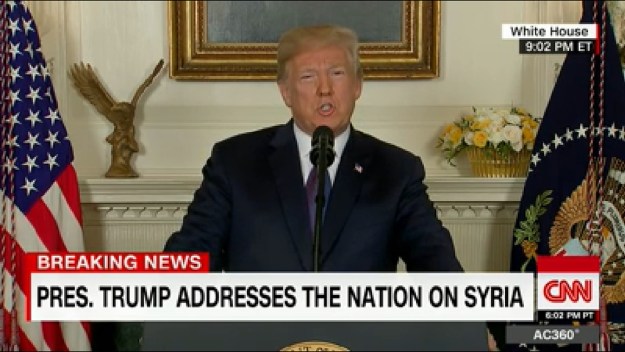 Trump just did his announcement, so I thought I’d put this up so you can have a place to discuss it.

President Trump ordered a military attack against Syrian President Bashar al-Assad on Friday, joining allies Britain and France in launching missile strikes in retaliation for what Western nations said was the deliberate gassing of Syrian civilians.

The coordinated strike marked the second time in a year that Trump has used force against Assad, who U.S. officials believe has continued to test the West’s willingness to accept gruesome chemical attacks.

Trump announced the strikes in an address to the nation Friday evening. He said, “The purpose of our action tonight is to establish a strong deterrent” against the production and use of chemical weapons, describing the issue as vital to national security. Trump added that the U.S. is prepared “to sustain this response” until its aims are met.

Trump asked both Russia and Iran, both Assad backers, “what kind of nation wants to be associated” with mass murder and suggested that some day the U.S. might be able to g”et along” with both if they change their policies….

I was curious to see what the leaders of Britain and France had to say about this. But when I go to British and French newspaper sites, it’s all about what Trump said (“Donald Trump annonce des frappes contre la Syrie, en coordination avec Paris et Londres“), not Theresa May or Emmanuel Macron. It’s like their involvement doesn’t matter, and they don’t feel obliged to explain it to their people — leave it to Trump. Is that the normal pattern?

15 thoughts on “U.S., Britain and France strike targets in Syria”