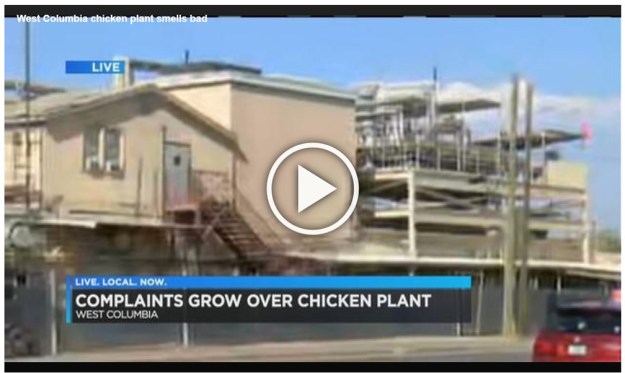 I read this news item in part because the headline cracked me up: “new ways for public to complain.” What — they’re going to start whining at a different pitch? I sort of expected an Onionesque piece that began:

But instead it began:

“It’s monumental for a city. It really changes, you know, people’s attitudes,” he said. “You know, after a hard day, they can come down here and walk around. They can experience what Columbia is supposed to be like.”

However, as Driggers admitted, there’s one reason he sometimes leaves the natural crown jewel early: when a breeze delivers a gag-inducing odor….

I was momentarily distracted by the fact that that guy got a whole sentence out, right at the end, without saying “you know.” Then, I focused on the story, which of course was about the smelly chicken plant along the river, near the Gervais Street Bridge.

As Councilman Tem Miles notes, the smell of the chicken plant has gotten worse in recent months. I’m not sure why, but it’s truly wretched.

As for the “new ways of complaining” West Columbia has “launched a new odor hotline and a new web page to report stinky smells.”

The website is here. It’s a bit vague what you’re supposed to do once you get there — it’s almost like the town doesn’t really want you to complain —  so you might want to try the phone number.