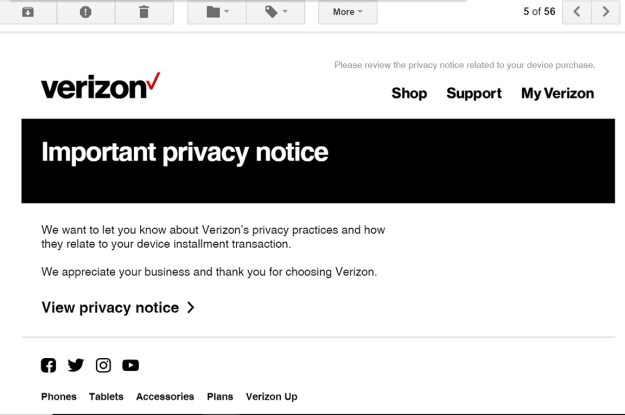 I guess it has something to do with the spectacle of Mark Zuckerberg, all dressed up like Daddy, looking stiff and uncomfortable, like he’s about to have a tooth pulled, in front of first Congress, and now the European Parliament.

Maybe it’s something else. But now it seems every company that I do any sort of business with is falling all over itself sending me notices about its privacy policies.

I suppose I’d know more what it’s about if I read one of them, but I’ve never read anything like that in the past, and I’d just as soon have a tooth pulled myself as start now.

My own privacy policy, which I’ve had ever since we switched from typewriters to mainframes in 1980, is this: “Don’t type anything into a computer that you don’t want to see published for all the world to see.” This was based on bitter experiences with the messaging function we had built in to that mainframe, sort of a forerunner of the text and the IM. We no longer had to shout our “witticisms” across the newsroom; we could privately send them to a chosen recipient. Which meant the comments might take on an edge you would avoid if saying it aloud.

But it only took one or two times of accidentally sending the message to the person the wisecrack was ABOUT to break me of that habit. “Ah, yes… ha, ha… That was a JOKE, you see, one I thought only you would appreciate. Ha-ha-ha!…”

Also — the storage on that entire mainframe system was probably far less than 1% of what you have on your phone. So, in order for the system to keep working, a couple of tech guys had to go into the system every night and delete everything extraneous, including that day’s messages — which they had to call up and look at individually.

Eventually, they got tired of reading the messages between this one woman and man who were carrying on a torrid adulterous affair, using the system as a primary means of communication. And someone had to speak to them. And everyone heard about it.

The rule became exponentially more critical when computers became connected to the internet.

Yeah, I suppose I might slip and do something indiscreet one day, but in the meantime I’ve generally managed to stay out of trouble with my policy.

Anyway, are y’all getting these emails, too?

One thought on “Are y’all getting all these notices about privacy?”