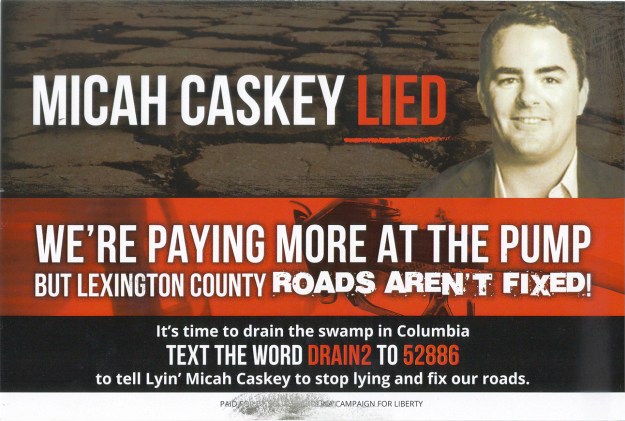 This is one of the most unfair, unwarranted attacks on a political candidate I’ve ever seen, and I’ve seen a lot of trash in my day.

And in terms of showing contempt for the intelligence of voters, I’m sure it’s the worst. I’m insulted that it came to my home, because it is aimed at idiots. And in keeping with the times, at a particular variety of idiot — the kind that will believe a painfully obvious liar when he accuses someone else of “lyin’.” There are obviously some of those about, but most people know I’m not one of them.

To be anything other than insulted by this mailer, a person would have to be completely ignorant of the following:

Yeah, that last sentence was kind of involved. It got away from me a little and got kinda repetitive. Chalk it up to the fact that I am really ticked off to see this.

It’s not just that no candidate, even a bad one, deserves to have this kind of scurrilous crud flung at him.

It’s not just that Micah Caskey is about as far as you can get from being a bad candidate. In fact, he may be the best representative I’ve ever had. He’s one of only two political candidates whose signs I have put up in my yard ever.

No, my fury has an added edge because these out-of-state sleazebags (the organization is based in Virginia) had the unmitigated gall to cite ME as a source. They quote something Micah said that was perfectly true and reasonable, and follow it with this transparent, pernicious, entirely unsupported falsehood: “Look around… he lied.”

This is beyond disgusting.

At this point I could use a laugh, so let’s end with this: The group claims that it “does not endorse, support or oppose candidates for elected office.”

So I guess they just do things like this to good people, a couple of weeks before the primary, for the sheer fun of it… 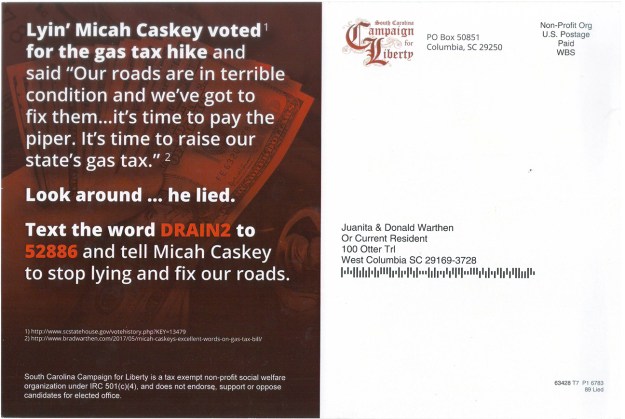