Before I get into the important stuff, I’ll share this: On my downtown walk yesterday, I ran into James Smith and Mandy Powers Norrell leaving the State House, and I asked James why he hadn’t released his tax returns — since some of y’all keep bringing that up.

He told me he was going to make them available to the media on Thursday and Friday. He said he wasn’t passing out copies, but folks would be free to peruse the documents on those days. I didn’t dig into why he doesn’t want copies going out: We were talking while crossing the street, he was going to meet with his campaign manager at one of those sidewalk tables in front of restaurants on the first block of Main north of Gervais, and I was in a hurry to get back to the office and drive to the twins’ school to hear them sing. So I just made a mental note: financial disclosure, Thursday and Friday, and hustled away.

At least, I think he said Thursday and Friday. So if I’m right, you read it here first. If not, I’ll correct it.

Anyway, in keeping with my campaign to drive Bud crazy (Look, Bud, more style over substance!), I’m more interested in something the candidate sent out today: his campaign music playlist, which he describes as “what’s been keeping me rocking as I travel the state.”

In my defense, this is more relevant in his case than in other candidates’, because he’s a musician himself — he used to play bass with the Root Doctors, many years ago. As he put it in the release:

Music has always been important to me — it can lift you up when you’re feeling low, make you run when you are tired, and inspire hope just when you need it.

Here’s his list, which you can find at Spotify:

Anyway, that should get a discussion started. What are y’all’s thoughts? And speaking of High Fidelity, remember Rob’s rules as you consider the list:

To me, making a tape is like writing a letter — there’s a lot of erasing and rethinking and starting again. A good compilation tape, like breaking up, is hard to do. You’ve got to kick off with a corker, to hold the attention ***, and then you’ve got to up it a notch, or cool it a notch, and you can’t have white music and black music together, unless the white music sounds like black music, and you can’t have two tracks by the same artist side by side, unless you’ve done the whole thing in pairs and… oh, there are loads of rules…

Yeah, he says “tape” instead of “playlist,” but give him a break: It was the 90’s and anyway, he’s a fictional character. But the rules are the rules… 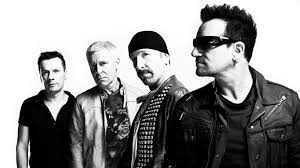 Yeah, U2’s good, and they sort of have political seriousness going for them, but they’re not THAT great…