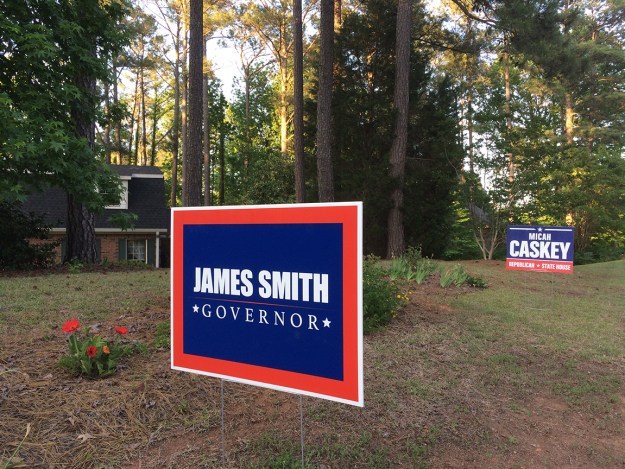 This is my front yard. As of Monday night, for the first time in my life, my yard features a campaign sign for a political candidate. In fact, it boasts two.

Well, with these two signs, I’m stepping out of the ranks of idiots (which my career as a journalist forced me to be, at least in a sense), and joining the polites — the involved public citizens.

By erecting these two signs, I also take a stab at resolving a dilemma.

A couple of weeks ago, Micah Caskey, standing on the State House steps, asked me to vote for him on June 12. Specifically, he nodded toward James Smith — whom he knows I like for governor — a few feet away and said he hoped I wouldn’t be voting in the Democratic primary, because he needs my vote in the Republican.

The fact that I have to choose, and can only vote for one of the two people I want most to elect on primary day, is a gross injustice. But it’s one I have to confront.

Normally, I take a Republican ballot. Not because I’m a Republican, any more than a Democrat, but simply because of where I live. If I don’t vote in the Republican primary, I get no say in who represents me in most offices. If I lived in Richland County, I’d probably vote mostly in Democratic primaries — especially this year, with that solicitor’s race. We have to choose carefully: Our primary vote is critical because far too often, it’s the only time we get a real choice.

That we have to choose one ballot and miss having a say in the other races that are contested in the primary (but not in the fall) is wrong, a denial of our rights as citizens. It thoroughly disenfranchises us. But those who make the rules refuse to see that.

At least this way, whichever primary I vote in, I’ll have done something for both of these fine candidates. I just wish I could vote for both of them…

13 thoughts on “I refuse to be an ‘idiot.’ I’m joining the ranks of the involved”