Doug and Norm were talking about Childish Gambino’s “This is America” video. So I made my usual joke about “What’s a Childish Gambino?,” and then I went to look at it. (I had recorded SNL over the weekend, but hadn’t watched it yet.)

Apparently, this is the “I Am the Walrus” or “American Pie” of the moment, with everyone trying to interpret the references. So I went and watched it. And I didn’t find it to be all that mysterious, although I’m sure I missed a lot on that one run-through. I felt like I “got” what I saw, but I’d need to watch it a few more times to catch things I missed, and wonder about things I don’t get.

This was my stream-of-consciousness reaction, which I’m rethinking even as I post it here, but this was the way it played for me as I watched:

And it’s also about a whole lot of other images and ideas from the black experience in America, spanning centuries. You have the references to “contraband” all the way through apparently random gun violence, and life going on around it.

The care of the guns just refers to the way we cherish them in America. We have another shooting, and elected leaders sort of close ranks in making sure nothing changes and the holy gun is protected.

He also runs through various caricatures of the Dangerous Black Male that white society has traditionally feared — the sexualized dancing, the violence, the drugs. His mugging facial expressions, some of his dance moves, the whites of his frightened eyes being the first thing you see in the darkness when he’s being chased at the end — all those things make cultural references to the black man as a ridiculous figure of entertainment for whites. So you have this jarring, sudden, back-and-forth going on between a minstrel show stereotype and the dangerous stereotype.

And the old cars remind me of the days of Hollywood’s blaxploitation fad, although they may be a little more recent than that.

The kids are in school uniforms, which seems a reference to the way people think one way of addressing social ills is to put kids in such uniforms. Yet the chaos goes on around them.

It’s interesting. I like that the music has a Caribbean feel to it (at least to my ears). After all, the black experience in America largely came first through the West Indies. South Carolina, the most pro-slavery state in the Union, was initially settled by people who had practiced a particularly brutal form of chattel slavery in Barbados.

And on and on.

Doug thinks I’m clueless. I’m not. The old guy who’s out of it is just a character I play on TV. Or on social media, anyway…

That’s first-blush, without looking to see what others thought of it.

Thinking back, I’m not sure I should have said “Caribbean.” It sounded exotic to my ears, and for whatever reason I thought “Caribbean.” Maybe it’s the way the guy’s dressed, as a combination between a slave working in cane fields (the American form of slavery got its start with sugar cane cultivation) and a Calypso dancer. Wait… I searched on that, and it seems calypso dancers aren’t as a rule shirtless. Don’t know why I thought they were.

Oh, and Childish Gambino? It’s Donald Glover. The guy I keep thinking is related to Danny Glover, but isn’t…. 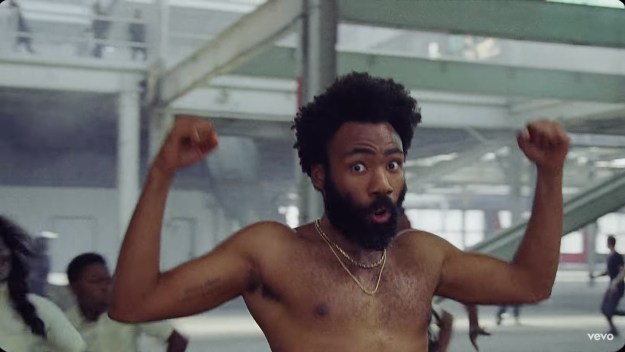 34 thoughts on “OK, let’s talk about Childish Gambino’s ‘This is America’”