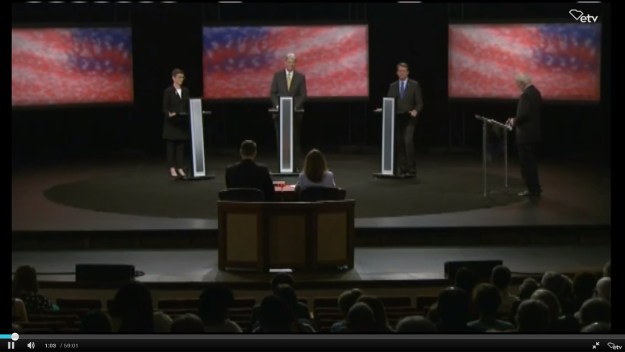 Sorry about the picture quality. ETV’s online video doesn’t have an HD option…

I sort of hesitate to post about the Democratic gubernatorial debate last night, since not one of y’all commented on the GOP one the night before.

I wonder: What was the viewership of those debates? I’m going to go out on a limb here and say it was probably lower than the deeply shameful turnouts we get in the actual primaries.

As Cindi noted in her column earlier this week, just 14 percent of registered voters bothered to vote in the state primaries two years ago, and 16 percent in 2014.

Really. Let that sink in. While it’s sinking, reflect that for a huge number of state offices, the primaries ARE the election, with no alternative offered in the fall.

If my guess is correct, and even fewer people watched the debates, that means even among that select few, a lot of people will be voting on June 12 with minimal information about the candidates. Which means that they’ll be voting blind. And while in this race, if not in others, there will be a choice offered in the fall, if it’s between, say, Catherine Templeton and Phil Noble, we are really up a creek.

But let’s not dwell on that.

If you DID watch the Democratic debate, or both of them, what did you think? My own opinion of the three Democrats in no way changed — James Smith is the obvious choice among them, and I’ve yet to see his two challengers offer any reason why they would be better nominees. In fact, they consistently offered evidence to the contrary — although I will say that this debate wasn’t nearly as vapid, to use Republican Micah Caskey’s term, as the GOP one.

Marguerite Willis isn’t going to “tolerate” the Legislature not doing her will. (Shades of Nikki Haley!) Yet again, we have a political novice not understanding the job description of governor of SC…

Phil Noble says he doesn’t want to come to Columbia to “make friends” with anybody. Yeah, Phil. Pretty much everybody has noticed that about you…

I’m with Marguerite on going bream fishing, any time. But personally, I think we’ll catch more with crickets than casinos. That’s my experience, anyway…

Phil keeps saying we’re 50th in education. I keep wondering, on what measure. Wait. He just changed it to 51st. Where’s the data?

Marguerite just asked where James Smith has been last 22 years. I know! He’s been right there in the arena, serving his constituents, his state and his country. None of which you have been doing, by the way. It’s so easy to be a critic. I should know…

Here comes Phil again with his lies about the NRA. He needs to learn a new tune… https://t.co/mCe1tnyswk

Everybody’s flubbing the question of how to bring down tuition. This should be easy for Democrats. The answer is for the STATE to start funding “state” institutions again….

And… just as I finished typing that, Smith got his turn and gave the correct and obvious answer, which anyone who’s paid any attention to “public” higher ed over the last three or four decades should know…

Rather than tell us what she would do about this or that issue, Ms. Willis repeatedly resorts to saying somebody other than herself needs to “do their job.” Someone should follow up with her on one of those…

Well, they all got the right answer on reapportionment. Good note to end on…

Y’all know me. I like to end on a positive note. Throw everybody a bone, why not?…

30 thoughts on “So, is anyone paying ANY attention to the races for governor?”