I thought about posting this on Memorial Day itself, but decided to wait.

For me — a guy who’s all about some patriotism and support for the military (and if there’s a spectator sport I love, it’s baseball) — there’s something off-putting about those special uniforms MLB players donned over the holiday weekend.

It’s not just that it’s so contrived, such a cheesy, sterile form of tribute to men who died in the blood and noise and fury and filth and noise of battle. They did not wear clean, white uniforms with camouflage numbers. They did not wear caps that look as much like what a deer hunter would wear as anything you’d see on a soldier.

But there’s also something… decadent, something last-days-of-Rome about it.

Of course, I’m guilty of romanticizing baseball. I think of it in very anachronistic terms as a humble, pastoral game played by plain men who did it for the love of the sport, guys who maybe had one uniform to their names, and that uniform made of wool that caused them to roast in the summer sun. (And they liked it, as Dana Carvey’s Grumpy Old Man would say.)

I just can’t help thinking of all the money spent on these uniforms that these players will probably wear only once. Which makes me think about how much — way too much — money there is in professional sports today, so much that vast sums can be thrown away on PR gestures that, as I said above, seem inadequate to the kind of tribute our war dead deserve.

I’m not blaming MLB here. This occurs in a context in which the fans, the entire society, seem to have lost all sense of materialistic restraint.

You, too, can have a genuine copy of the jersey your hero wore for one game for only $119.99. Or, if you’ve really lost your marbles and have more money than anyone needs, you can have the actual jersey that a player wore, for $2,125! Unless someone with priorities even further out of whack outbids you!

It just all seems kind of nuts to me. And vaguely offensive. Does this make any sense to anyone? 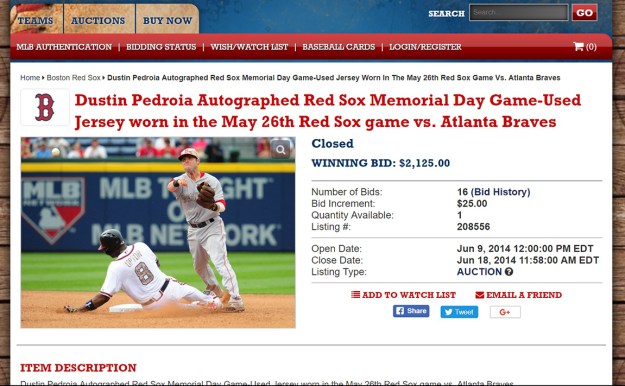 4 thoughts on “Something off-putting about those ‘patriotic’ uniforms”