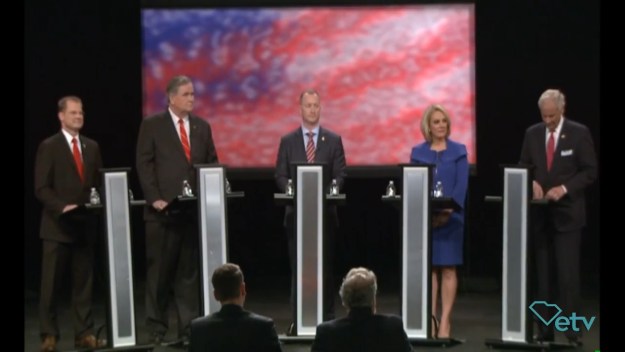 Actually, it seems a bit jarring to use any form of the word “thought” in relation to that sorry spectacle. My Republican representative put it well:

Somebody wake me up when a candidate says something that isn’t vapid consultant-speak. #SCGovDebate

There just didn’t seem to be much thinking going on on that stage. In fact, I found myself wondering whether, after all these years, even the GOP base has gotten sick of hearing the same pandering cliches stated over and over, ad nauseam.

Of course, there were exceptions to the right-wing cliche thing:

Wait, I need to exempt Yancey McGill from the “right-wing cliches” thing. He still thinks like a Democratic senator from the Pee Dee, circa 1955. Bless his heart…

Old times there are not forgotten. At one point during the debate, someone asked me about McGill, “Is that the one they call Foghorn Leghorn?” No, no, I replied — you’re thinking of Henry. Although even he doesn’t have as firm a claim to that as Fritz Hollings. Of course, with Fritz, you never had the feeling someone was pulling a “Chatty Cathy” string. Fritz always spoke his mind.

My most popular tweet during the debate — 15 likes, which isn’t much by usual standards but I think this was a fairly low-viewership event — came with a typo, I’m embarrassed to say (and with Twitter, once there’s been a like or a retweet, I always hesitate to delete and start over). Substitute “rude” for “ride:”

That young guy I’ve never seen before — the Marine-bidnessman guy — thinks as governor he’d be “commander-in-chief” of SC. He’d certainly be in for a ride shock, wouldn’t he?

Lynn Teague had an apropos reaction to that:

Time for him to review our state constitution. He might want a drink first, before coming to terms with the office he’s running for.

In retrospect, I felt a little bad about this one, as I worried it may have been misunderstood:

Ms. Templeton keeps doing her best to bring the crazy, or at least be the most extreme, but Kevin Bryant’s had that territory staked out since before she ever dreamed of running for office…

I didn’t mean to say our lieutenant governor is crazy. I mean he’s got the extreme territory staked out. He’s pretty out there. But at least he’s an extreme conservative, instead of, say, a “buzzsaw,” which means there’s some legitimacy to him, or at least consistency.

Did I have anything positive to say about anybody? Yes, I did:

Now that Henry’s talking about unaccountable agencies in our government that answers to no one, someone is at least taking about an actual SOUTH CAROLINA problem, instead of spouting cookie-cutter right-wing cliches…

So good one there, Henry. Nice to hear someone talking about an actual problem that exists in our state, instead of nonexistent things such as “sanctuary cities.” Of course, we know who talks the most about those.

My nominees for lowest point in the debate:

Henry talking about how proud he is to be helping Trump patrol the border down in Texas.

Catherine Templeton expressing her eagerness to execute some prisoners.

You may have your own favorites. Suggestions?

In any case, I didn’t hear anything that made me want to go out and take down my James Smith sign…