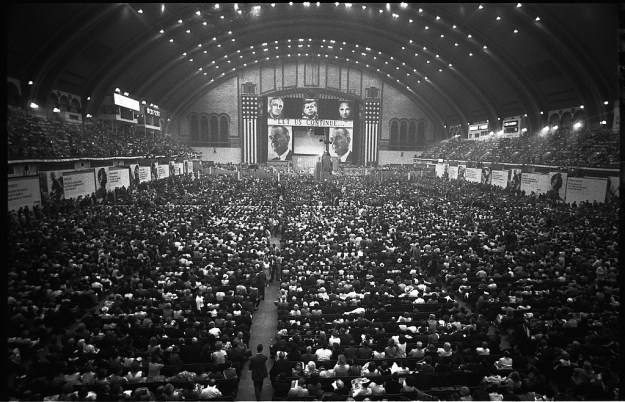 Back when parties were parties…

Our own Karen Pearson said some very true things in this comment:

I’m all for keeping “parties ” out of it. We’re far too far along the way of voting for party instead of person. The candidates are forced to go farther and farther left or right in order to win a prime spot in their own party. This response encourages each party to go become even more “liberal” or “conservative.” Which means that in the next election the division becomes even greater, and ultimately excludes one side or the other from any possible voice in the ruling party. The ability of government to function disintegrates. Then we all stand around and decry our representatives because they can’t get anything done. This is madness.

She’s absolutely right, talking about the parties we have today. But her excellent points remind me of a phrase I’ve been hearing a good bit in recent years, most recently in a Dana Milbank column this morning in The Washington Post:

Political scientists have observed that American politics has deteriorated into an unstable combination of weak parties and strong partisanship — dry brush for the likes of Trump and Blankenship to ignite. The 2002 McCain-Feingold campaign-finance reform restricted party fundraising, and the Citizens United Supreme Court ruling in 2010 essentially destroyed parties by giving everybody else freedom to spend unlimited sums to buy politicians. The moderating influence of parties was replaced by the radicalizing influence of dark money.

Related to this, partisanship in Washington escalated, aggravated by partisan redistricting that puts almost all House members in safe seats where the only threat comes from primaries. Primary voters tend to favor extreme candidates — who, once in Congress, turn politics into warfare.

Democrats suffer from the weak party/strong partisanship phenomenon too, as seen in the Sen. Bernie Sanders (I-Vt.) campaign’s squabbles with the Democratic National Committee and the recent efforts by some Sanders followers to taint any candidate supported by the party. But the problem is most severe among Republicans…

Oh, excuse me. I meant this phrase: “an unstable combination of weak parties and strong partisanship.” Milbank cites “political scientists,” plural, but the phrase seems to have started on its current rounds with Julia Azari, a political science blogger and prof at Marquette University. As she put it a few days before the 2016 election, “The defining characteristic of our moment is that parties are weak while partisanship is strong.” And as she said, that’s a bad combination.

Y’all know I don’t think much of parties. But that’s largely because of what they’ve become. If they were more like what David Broder used to reminisce about, reliable institutions for winnowing candidates and putting forth the strongest ones — institutions that answered the question, “Who sent you?” — I wouldn’t hold them in such contempt.

We’re not just talking about the most dramatic case — the GOP’s utter helplessness to keep Donald Trump from waltzing in and taking their presidential nomination. A weak GOP is what gave us the Tea Party — which toppled party stalwarts left and right. It’s what weakened John McCain’s hand and made him think he had to pick Sarah Palin as his running mate instead of Joe Lieberman. More recently, it’s given us Roy Moore, and now this Blankenship yahoo in West Virginia. Line up enough know-nothing extremists behind you, and the party is helpless.

And Democrats, don’t think you’re immune. Some of the same forces weakening the GOP have been at work on your party for a long time. The Bernie bros whine about how the party leadership tried to cheat their guy out of the nomination. What stuff. In a time of strong parties, Hillary Clinton wouldn’t have had to spend a moment’s thought on Bernie Sanders. She’d have been a shoo-in, and she wouldn’t have done any of that pandering to extremes, such as turning against TPP.

Look back at my post about James and Micah. If the Democrats had a strong party, I would just go ahead and vote for Micah in the Republican primary, knowing that James had the Democratic nomination for governor locked up — everybody who is anybody in the party is lined up solidly behind him. But as polls have shown, Phil Noble — and to a lesser extent Marguerite Willis — have a shot (a long shot, but a shot) at denying it to him. Or at least forcing him into a runoff — which given the weakness of their candidacies should be impossible.

You don’t believe those polls? Well, I’m not convinced by them, either. But folks, this is the South Carolina Democratic primary electorate, the crowd that gave you Alvin Greene. A lot of people gave then-chair Carol Fowler hell for not preventing Greene from sneaking in and taking the U.S. Senate nomination. But what could she have done?

And folks, Alvin Greene wasn’t entirely a fluke. Such absurd things happen when parties are this weak.

Milbank is wrong to blame the problem on money, by the way. Sure, that can exacerbate the problem, but the fact is that Broder and others were writing about this in 1991, long before the campaign-finance developments that Milbank bemoans.

A lot of trends have gone into destroying parties. The rise of radical individualism and decline of institutions in general have done a great deal to undermine parties’ ability to produce the best candidates — as has the growth of excessive faith in direct democracy (such as primaries usurping the decision-making prerogatives of conventions), which has been a long-term problem throughout our history.

Lately, the decline in traditional news media (this morning on the radio, I heard the number of professional journalists plying their trade in this country was now half what it was 15 years ago; I’m shocked the number isn’t far lower than that), combined with the rise of new media that make every Tom, Dick and Harry his own publisher, have accelerated the problem. Not caused it, but further pushed a wheelchair that was already going downhill pretty fast. The cost for extremist flakes to go it alone is now lower than ever.

Combine all that with partisan redistricting, which forces the people who get elected under party banners to become more and more extreme, and the result is that our electorate is filled with people who have little loyalty to and no deference toward parties as institutions, but who are filled with passionate, increasingly extreme partisan sentiment, defining themselves as the only good people, and those who vote for candidates of that other party as the enemy.

And it just keeps spinning further out of control….