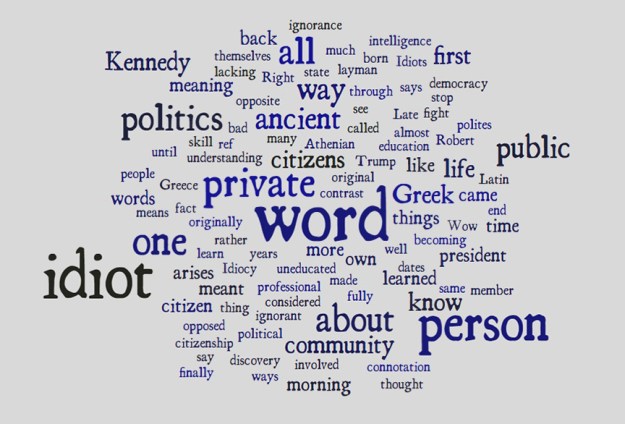 I love discovering things about words. I love it the way… well, probably the way some of y’all like football. I get a rush out of it, and I can’t stop talking about it.

The discovery I made this morning is a big one, full of meaning, a discovery that sends tentacles of understanding into a lot of things that matter to me. It ranks up there among my most exciting word finds ever, right alongside when I learned the word “esoteric” in high school. (For years I had wanted a word for that concept, and I finally had one. I confess I overused it for some time after that.)

This morning, I learned what “idiot” means. Or rather, what it meant originally, which for me tends to be the same thing.

I can’t believe I didn’t know this before. I feel like such an… well, you know….

I learned it from TV, of all places. At the very end of the fourth and last installment of the documentary mini-series “Bobby Kennedy for President,” which I was watching while working out on the elliptical this morning. At the very end, Kennedy aide William J. Arnone says:

I thought, wow — that’s just too good to be true. But it isn’t. That’s what it meant to the ancient Athenians. A person who wrapped himself in the personal, the private, and turned his back on politics and the community was called an “idiot.” Here’s what Wikipedia says:

Idiot is a word derived from the Greek ἰδιώτης, idiōtēs (“person lacking professional skill”, “a private citizen”, “individual”), from ἴδιος, idios (“private”, “one’s own”).[1] In ancient Greece, people who were not capable of engaging in the public sphere were considered “idiotes”, in contrast to the public citizen, or “polites”[2]. In Latin the word idiota (“ordinary person, layman”) preceded the Late Latin meaning “uneducated or ignorant person”.[3] Its modern meaning and form dates back to Middle English around the year 1300, from the Old French idiote (“uneducated or ignorant person”). The related word idiocy dates to 1487 and may have been analogously modeled on the words prophet[4] and prophecy.[5][6] The word has cognates in many other languages.

An idiot in Athenian democracy was someone who was characterized by self-centeredness and concerned almost exclusively with private—as opposed to public—affairs.[7] Idiocy was the natural state of ignorance into which all persons were born and its opposite, citizenship, was effected through formalized education.[7] In Athenian democracy, idiots were born and citizens were made through education (although citizenship was also largely hereditary). “Idiot” originally referred to a “layman, person lacking professional skill”. Declining to take part in public life, such as democratic government of the polis (city state), was considered dishonorable. “Idiots” were seen as having bad judgment in public and political matters. Over time, the term “idiot” shifted away from its original connotation of selfishness and came to refer to individuals with overall bad judgment–individuals who are “stupid“. According to the Bauer-Danker Lexicon, the noun ίδιωτής in ancient Greek meant “civilian” (ref Josephus Bell 2 178), “private citizen” (ref sb 3924 9 25), “private soldier as opposed to officer,” (Polybius 1.69), “relatively unskilled, not clever,” (Herodotus 2,81 and 7 199).[8] The military connotation in Bauer’s definition stems from the fact that ancient Greek armies in the time of total war mobilized all male citizens (to the age of 50) to fight, and many of these citizens tended to fight poorly and ignorantly.

Wow. My whole life, I have tried to learn and become one of the polites, and to urge others to do the same — with mixed success on both counts. Often I’ve done so overtly, such as when I set out my dichotomy about the contrast between people who see themselves as consumers and those who see themselves as citizens. Sometimes it’s less overt, but I’m always arguing that one of the first things a person must learn as a member of a community is how we are all inescapably connected. (Not that we should be, but that we are. And politics is what we do in light of that fact.) To me, becoming a fully realized, worthwhile human being is to a great extent about understanding and embracing that connection, becoming a fully mature member of a community and seeking ways to make community interactions more positively effective.

All this time, all these words, and I didn’t know until today that a person who pursued the opposite of that was, from the dawn of Western civilization, called an “idiot.” Right up until the late 19th century, when it started to mean a person of very low intelligence.

By the way, in researching this, I found this piece, which led this way:

In a recent Quinnipiac University poll, respondents were asked what word immediately came to mind when they thought of Donald Trump: The No. 1 response was “idiot.” This was followed by “incompetent,” “liar,” “leader,” “unqualified,” and finally, in sixth place, “president.” Superlatives like “great” and a few unprintable descriptives came further down on the list. But let us focus on the first.

Contemporary uses of the word “idiot” usually highlight a subject’s lack of intelligence, ignorance, foolishness or buffoonery. The word’s etymological roots, however, going back to ancient Greece, suggest that, in the case of the president, it may be even more apropos than it might first seem….

And of course, the original sense of the word speaks to the objection I have to Trump. He is a man who spent the first 70 years of his life pursuing his own private interests and satisfying his own appetites. Almost everything about the ways he violates presidential, political and moral norms arises from that utter inexperience in, and disdain for, civic life. He has shown a sort of idiot savant (to use the word a different way) flair for a certain kind of politics, but it arises from a lifetime of avid self-promotion, and therefore arises from his pursuit of private rather than public benefit. (In Star Wars terms, you might say the Dark Side of politics is strong with this one.)

This is fascinating. So much more can be said about it, but I’ll stop now and share this much with you…

9 thoughts on “What does it say about me that I didn’t know what ‘idiot’ meant?”