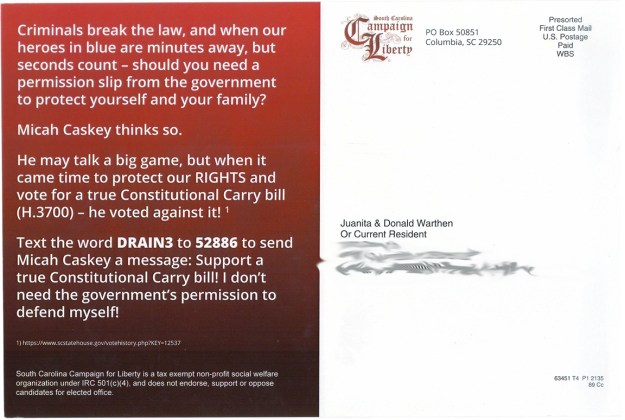 Another mailer came from that same group attacking my rep, Micah Caskey.

Again, it relies entirely upon an assumption that voters are mentally feeble.

This time, the accusation is that Micah doesn’t support “2nd Amendment rights” because he didn’t vote for a “constitutional carry” bill. 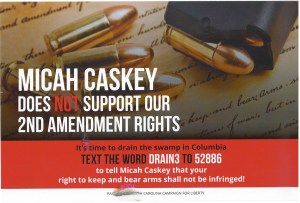 I don’t know what Micah thinks about “constitutional carry” and don’t really care. The other Caskey, our resident 2nd Amendment guy Bryan, sees no need for such a provision in South Carolina, which is a “shall issue” state. In other words, if you can own a gun, no one can refuse to issue you a permit.

“Constitutional carry” is the kind of litmus test issue that shows how far gone alleged “conservatives” are today. Once, when real conservatives roamed the Earth, you’d get attacked if you didn’t support a balanced budget amendment. Now, you have to support the kind of hyper-pro gun legislation that is only important to the kind of people who like to freak out the citizenry by carrying a weapon down a city street simply to assert that “I got a right to!” (I know those aren’t exactly the same thing. I’m just thinking there’s probably a lot of overlap there.)

At least, with these people that’s the standard. To the extent that they can be said to have standards.

My favorite bit: “He may talk a big game, but…” You mean, like, when he mentions (which he seldom does) carrying a rifle into combat in Iraq as a United States Marine, stuff like that?

Another good part: “I don’t need the government’s permission to defend myself!” That’s right, you don’t. And you never have. Which underlines how unnecessary that bill was.

Anyway… I’m going to ignore that and take comfort from this straw poll that the Lexington County GOP did at their June meeting. Nathan Ballentine proudly tweeted it out because he got 72.9 percent.

Micah Caskey got 97.6 percent. Sounds like he might have earned the right to “talk a big game…” 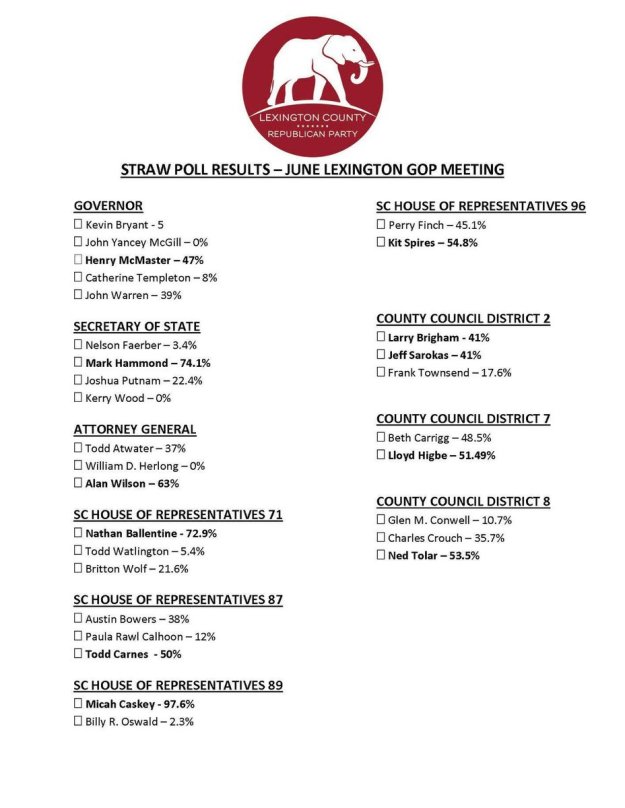 27 thoughts on “Another stupid attack on Micah Caskey”