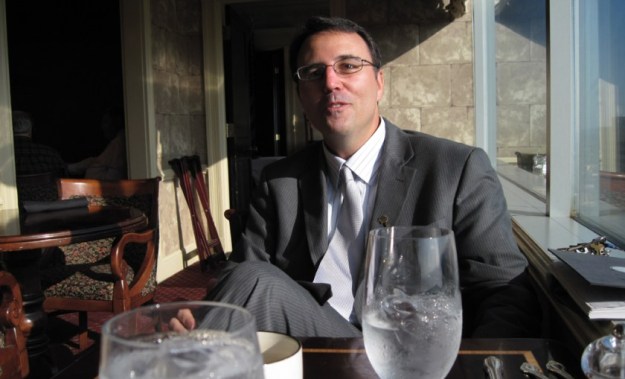 Tony Mizzell in 2010: At the end of the interview, he gave me a check…

The weirdness has been there from the moment I sold my first blog ad, back in 2010.

It was to Tony Mizzell, city county candidate.

For a guy who had spent his whole, long professional life totally insulated from the advertising department, it was… an unsettling experience.

My first ad. From the start, it was weird…

I had set up an interview with the candidate. Here’s my post about that. He had also agreed to buy an ad. The weirdness happened the moment he and I were done with the interview. He said something like, “Oh, yeah, I owe you something!” And he gave me a check. Right there. At the end of an interview.

This was a perfectly natural transaction for Tony. He worked at Chernoff Newman, and dealt with digital advertising for them. In fact, he gave me a bit of code to attach to the ad so he could track its performance (he was pleased, as I recall).

But some element of that awkwardness, that ethical seaminess, has been present in practically every sales pitch I’ve ever made. And I don’t know what to do about it.

I’ve tried, three times, to get other people to sell ads for me so they can be the Advertising Department and I can be the Editorial Department, and never the twain would meet, as God intended. But it’s never worked out. Partly this is because I’ve never worked with anyone who was used to the world of political advertising. And let’s face it, while I have and have had some wonderful nonpolitical advertisers (Palmetto Citizens Federal Credit Union, AT&T, Yesterday’s prominent among them), politicians and advocacy groups are the most fertile field for selling ads for this venue.

And of course, ethically speaking, they’re the worst ads for me to try to sell.

But it keeps falling back on me. And it creeps me out to do it. So my ads are few and far between. I was grateful to have Micah Caskey’s business again this time around, which ended up leading indirectly to a last-minute primary ad from Paula Rawl Calhoon. I enjoyed having them there, and I just today took them down, having procrastinated for a week. I miss them already. Their presence made the blog look more colorful. And more prosperous.

So I’m looking around for new customers, when I can force myself to think about it. I was hoping Nathan Ballentine would run for John Courson’s seat, because, well, Nathan’s advertised with me before, and that makes the conversation easier. But he probably made a good move staying out of it, given the composition of that district.

So now what do I do? I decided to try Dick Harpootlian, even though he probably won’t have a lot of motivation to spend money until he has serious opposition. Dick being Dick, I thought I’d strike a somewhat facetious tone. Here’s the Direct Message I sent via Twitter:

Hey, Dick, what happened to your opponent? In any case, I’d like to talk about your campaign sometime…. Oh, and on a COMPLETELY UNRELATED matter, you should take out a campaign ad on my blog. I can send details. Yeah, I no longer have that wonderful wall of separation between editorial and advertising… It’s all me…

What do you think? Too much? Too little? Yeah, it would be great to separate the “I’d like to talk to you about your campaign” conversation from the “let me sell you an ad” conversation, and I do that when it’s workable, but this is a special election, and the time window is very limited.

Also, I don’t think Dick’s the kind of guy who’s going to feel woozy at the idea of a guy wanting to make money from what he does.

Trouble is, I am that sort of guy. I was shielded from such considerations all my life until recently. And it still feels unnatural. Notice how I didn’t really bother giving a pious Miranda-like pronouncement that whether you buy an ad or not will not be used against you in the court of my opinion. Sometimes I do it; sometimes I don’t. When I do, it sounds a bit priggish. And I’ve noticed that I don’t even try to sell ads to candidates I’ve been super-critical of. Of course, I don’t really try to sell ads to MOST candidates, whether I’ve been critical of them or not. I have such an aversion to the whole process.

If any of y’all have any ideas about how to go about it better, I’m all ears…

So… I made a half-hearted, conflicted stab (my usual approach) at selling an ad to THIS guy…

14 thoughts on “Anybody have any ideas on how I can sell ads and be totally ethical?”