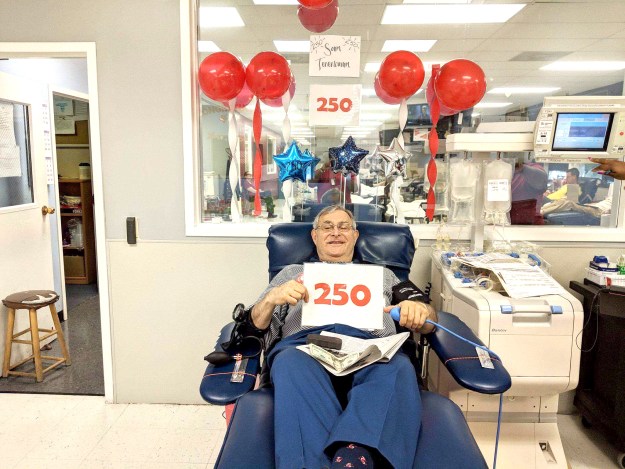 Last week, my good friend Samuel Tenenbaum shared the above photo with me.

I’m proud to share it with y’all. And proud to know Samuel. He’s been giving platelets at the Red Cross for more than a decade, and on the day this was taken (eight days ago) he had officially given 250 units! He gets up and does it sometimes at the crack of dawn, and has been known to bring donuts for the Red Cross workers. So they love the guy. On the day he passed his milestone, he brought pizza.

Of course, to Samuel the milestone is already a thing of the past. That day, he reached 251. This past weekend, he gave two more units to reach 253. (They generally take two units at a time, and sometimes three.)

He’s the one who inspired me to start giving platelets on a regular basis myself. I had hesitated. Although I’d been giving blood for years, overcoming a lifelong horror of such things in order to do so (something I bragged about a lot), I had balked at this.

Why? Because of the inconvenience factor. Once you get good at it, you can give whole blood in little over 5 minutes, from the moment the needle goes in. Giving red cells only, which I did for awhile, takes a little longer — maybe 40 minutes or so — since they have to separate the red cells from your blood and pump what’s left back into you.

Whereas giving a couple of units of platelets can take as much as three hours from the time you walk into the place until you walk out, stiff from lying there so long. Not only that, but while you have to wait 8 weeks to give whole blood again and 16 weeks to give red cells, you can give platelets weekly! And as soon as that week is up, you’ll start hearing from the Red Cross again. Not because they’re greedy, but because they’re desperate: There are few platelet donors, and many urgent needs for platelets.

But, inspired by Samuel, I gave in and started giving platelets. And I compromised on the weekly thing, setting up a standing appointment every two weeks (I found I felt really tired for a couple of days after each donation, and figured I needed the recovery time).

So I built that standing appointment into my gmail calendar… which tells me I’m supposed to be there right now, as I type this! But I’m not.

That’s because I’ve been banned from giving, for good. It happened several months back — at the end of last summer, in fact. I just haven’t had the heart to take it off my calendar. I miss giving. It was my thing, you know. I can’t afford to give money, and my stupid asthma and allergies kept me from military service, but at least I could do this for my community!

Here’s what happened: I got a call from the Red Cross one day. Thinking it was someone reminding me of my appointment, I was about to say, “I know; I know!” when I was told something unexpected. Someone, somewhere, had had a problematic reaction to my platelets. They wanted me to come in for a special blood test, just in an abundance of caution.

So I went in, and had the test done, and figured I’d be going to my next appointment as usual, and then… I got another call. I was told that because I had some unusual antibody in my blood, they could no longer accept my donations, according to FDA guidelines.

I was told I was perfectly healthy — that this condition was no threat to me. But the existence of that factor in my blood could be harmful, under certain rare conditions, to someone else. Again, the abundance-of-caution thing.

I got a letter in the mail with a couple of charts from my test with mysterious notations about a1 cells and a2 cells and b cells, and it made no sense to me.

All I know is, I can’t give any more. Ever, apparently. I just made the list, buddy.

Which means some of y’all need to do so. Samuel can’t do it all. And the need is constant: Platelets are only good for five days.

Why does he do it? For a number of reasons, starting with the selfish: It tells him he’s healthy, and each time you give, you get a mini-physical — blood pressure, iron levels, pulse, and so forth. But ultimately, as usual with Samuel, it’s because somebody needs to do it. “Each time I walk out of there, I know that I have changed the world,” if only a little bit.