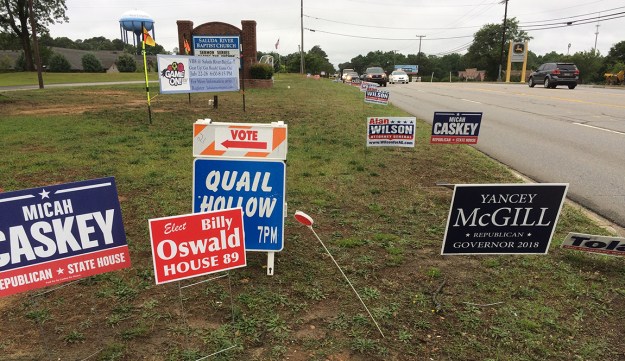 As you know, there are two candidates I particularly want to see elected this year — James Smith and Micah Caskey. And as you may have noticed, in recent days I’ve been more anxious about James than about Micah — after all, Micah received 97.6 percent support at a recent county GOP meeting.

So I chose a Democratic ballot at Quail Hollow precinct this morning. I felt a bit weird doing so, since not a single Democratic candidate had posted any signs in front of the polling place, as you can see above. In fact, it occurs to me that the closest sign for a Democrat to this location might be the one for James in my yard, 1.6 miles away.

But I wasn’t quite alone — I was the 15th to choose a “DEMOCRATE” ballot, as it was hand-lettered in red magic marker at the sign-in table. (You can’t expect folks in Lexington County to know how to spell every weird, exotic word in the dictionary, can you?) And as it happened, only 44 had chosen a Republican ballot. Which was weird — my precinct going only three-fourths Republican. One of the poll workers told me it seemed a lot of my neighbors had voted absentee.

This, of course, raises the stakes on who those few voters were. Was it only the extreme partisans who would go for a Phil Noble because James is too sensibly centrist, or support a woman who is proud of being a purely destructive force (which is what is meant by “buzzsaw”)?

On my way in, there were two people standing in front of the entrance where candidates or surrogates are allowed to campaign. The young woman smiled at me, but didn’t say anything (was I glowering at her or something?). The young man said, “Mr. Micah Caskey thanks you for voting today!” I said, “Well, I like Micah very much,” which seemed to please him although he probably noticed how noncommittal it was.

(Man, I hope Micah wins big. If he even comes close to losing, I’m going to feel really bad.)

As a result of not having to vote on them, and no longer having to make an endorsement decision, I never made up my mind on a couple of hot races (or at least, they should have been hot) in the Republican primary. Since I didn’t have to, I just didn’t do the legwork:

Attorney General — I like both Alan Wilson and Todd Atwater. I don’t damn Alan for his Quinn association (I don’t do simplistic, or at least not usually), and I think he’s been a pretty decent AG. And I like Todd as well. I just didn’t focus enough to force myself choose between them.

Lexington County Council District 8 — Incumbent Ned Tolar has two or three opponents. I’ve seen a lot of signs for him, and for opponent Glen Conwell (the guy who got all that money from Lou Kennedy of Nephron). I tried doing a little web research on the candidates, and found virtually nothing. I’d have tried harder if I’d been voting in that one.

Anyway, have you voted, and if so, how did it go? I see that there were lines in some locations, even though there were not at mine… 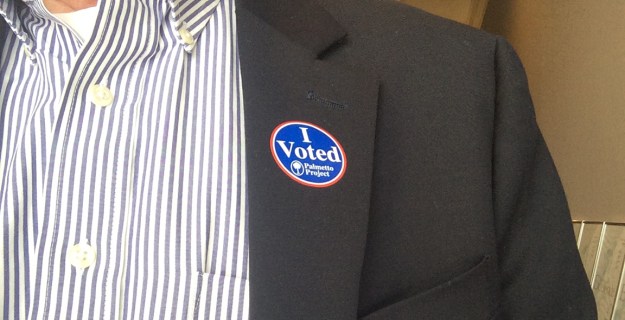