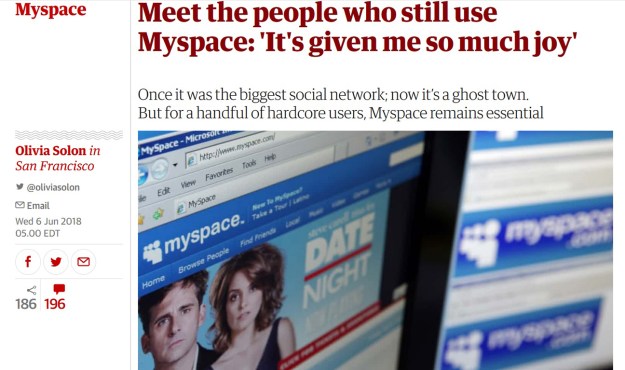 I enjoy looking at The Guardian now and again, even though, to find the stuff I like, I have to plunge into an alien universe that is mostly about how — according to The Guardian — stupid, violent, warmongering, racist, oppressive, gun-crazy and all-around evil America is.

But as I say, there are good bits (a lot of them having to do with pop culture), and I enjoy them (even though I get confused when, in those pop culture pieces, they refer to an “actor” and I wonder who’s this guy they’re talking about?, and it’s not a guy — they mean an actress).

Today, the good bit was headlined: “Meet the people who still use Myspace: ‘It’s given me so much joy‘.” An excerpt:

Almost every day, Kenneth Scalir takes a trip to the library or a cafe near his home in Sherman Oaks, California, to spend about an hour on his favourite site: Myspace.

Scalir, 48, is one of a dwindling group of people still committed to what was once the most popular social networking platform in the world, with more than 100 million users at its peak. While most people have long abandoned Myspace in favour of Facebook, Twitter and Snapchat, Scalir roams the digital graveyard searching for signs of life.

“Myspace is such a huge part of my life. I’ve met new people I otherwise wouldn’t have met and learned about new fashions and bands,” said Scalir, who goes by KROQ Ken online because of his love for the alternative rock station.

“It has given me so much joy,” he said. “When I didn’t have a girlfriend or lovers, at least I had Myspace.”…

This takes me back to my initial impression of MySpace. I thought of it as something my kids did, and that an adult who used it was kind of sad. I gave Andre Bauer a lot of grief for it in a post headlined, “Hey, Dudes, check out my site…”

Hey, it was March 2006. “Social media” was not a term in use. That’s the month Twitter was created, but it wasn’t publicly released until four months later. (And when it was, they explained it as “microblogging.”) And Facebook was this thing my daughter had signed up for when she started at College of Charleston — it still hadn’t broken out of the higher-ed milieu. (It would do so in September of that year.)

Later, social media would be an essential part of any electoral or marketing campaign. But that was not yet the case. At that time, it was still a curiosity. Which made Andre being on it a curiosity.

Still, I was later embarrassed for having made fun of Andre being on the cutting edge. Later, I was relieved that once again it was fashionable to make fun of MySpace. That was in 2011.

And now, I learn that it still exists, and there are still people using it?

Speaking of which… Andre’s page is still up. Here it is…

6 thoughts on “Hey, did you know MySpace still exists, and people USE it?”