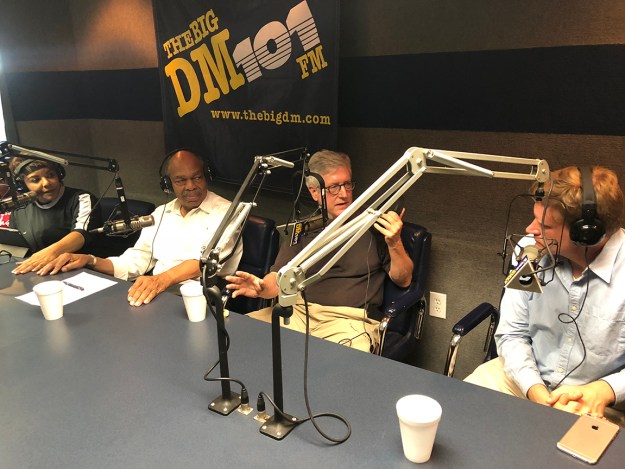 Cynthia Hardy, Jim Felder, me and Jon Parker on the radio Sunday night. At this moment I’m apparently making a terribly cogent point that requires hand gestures, even on the radio.

(Editor’s note: I wrote this last night, but am just posting it today because of problems with the sound file. WordPress will take an MP3, but not a WAV.)

Did y’all watch that Democratic gubernatorial debate tonight? I didn’t get to see most of it, but I heard a good bit on the radio while I was driving first to a program at my youngest grandchildren’s school, then over to my parents’ house to check on my Dad (he had a fall recently, but is doing better), then home. A few seconds after I turned on the TV, it was over.

I did pull over a couple of times to Tweet about what I was hearing. I Tweeted this at the end:

Remember when candidates — especially ones who had not held office and were introducing themselves to the public — would try to be PLEASANT so people might actually WANT to see them in office over the next four years?

Sunday, I was a guest on Cynthia Hardy’s show on the Big DM (you can watch the show here). Before the show started, Cynthia asked whether Jim Felder and I had heard the “race-baiting ad” — as she said some had called it — that Marguerite Willis was running. I said no, and she played it for us.

Give it a listen. And (let me know if you had technical difficulties.)

When it was done, I said, “So… I suppose she’s playing that mostly on the country stations…” As soon as I said it, it occurred to me that my joke might fall flat, although Jim Felder laughed politely.

That’s really something. And it’s totally consistent with what I heard of the debate, which at another point caused me to Tweet:

Wow. Phil Noble and Marguerite Willis, I am now convinced, will say and do anything, will stop at nothing, to tear down the only Democrat any rational person can imagine winning in November…

But that ad was something — grossly unfair, misleading and desperate. But the issue remains, will she and Noble manage to inflict enough damage on a good man so as to ensure a GOP victory in the fall? Because surely the two Democratic challengers are bright enough to know neither of them would have a chance in a general election…

9 thoughts on “Marquerite Willis’ race-baiting radio ad (and the debate, too)”