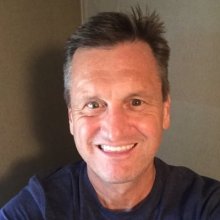 What grabbed my attention was one of the chief reasons Tom offered: He’s mad at the governor over his veto of the roads bill last year.

But unlike my own representative Micah Caskey, who ripped the governor a new one for vetoing the bill, Tom’s ticked because Henry didn’t veto it hard enough, so to speak.

Tom quotes from his own statement that he had entered into the Senate Journal at the time of the veto:

“I’m also disappointed in Gov. Henry McMaster for what can fairly be described as a “drive-by veto.”  Not only did he fail to try and any build support for his gas-tax veto – I’ve yet to hear of even one instance where he met with a legislator to try and garner support for having his veto sustained – he did not provide those of us willing to fight for taxpayers with the chance to do so in his absence; he simply “checked the box” by vetoing the bill as quickly as possible and returning it to the General Assembly for an equally quick override, even though I and other reform-minded legislators asked him to delay issuing his veto so that we had a full two weeks to rally support for it being sustained.”

In a way, though, both Micah and Tom are hitting the governor for the same thing: Not taking the issue seriously enough, and acting with a disgusting degree of political expedience.

Micah was indignant that the governor never seriously offered an alternative to the gas-tax increase. This was particularly galling when the GOP leadership in the House was taking the political risk (by Republican standards) by raising the tax. I think if Henry had been pushing a real alternative, Micah could have respected him more.

Tom’s critique is that the governor merely pandered by offering the veto — something with which I think Micah would agree — without caring whether it was sustained or not (or perhaps even wishing it to be overridden, which it promptly was).

Both hit the governor for putting his own political advantage ahead of important matters of state policy. Both seem to see him as disrespecting allies and potential allies in his own party, and worse, disrespecting the people of South Carolina.

From their perspectives at either end of the GOP spectrum — that of a moderate House freshman and that of the most ideologically pure veteran senators ever to serve in the State House — they’re fed up with the governor’s fecklessness.

So both are backing James Warren. 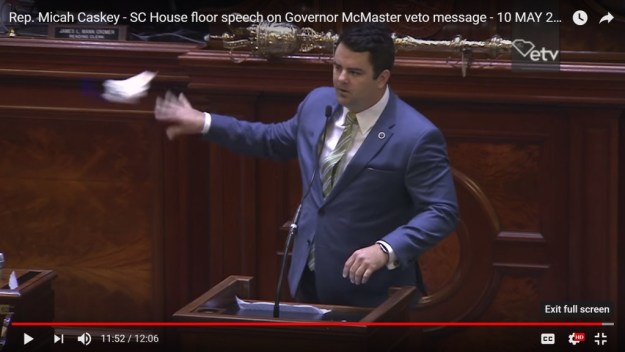 Micah Caskey last year, wadding up the governor’s veto message and throwing it away.

3 thoughts on “Ol’ Henry can’t catch a break: Tom Davis hits him from the OTHER side of the roads-bill veto”