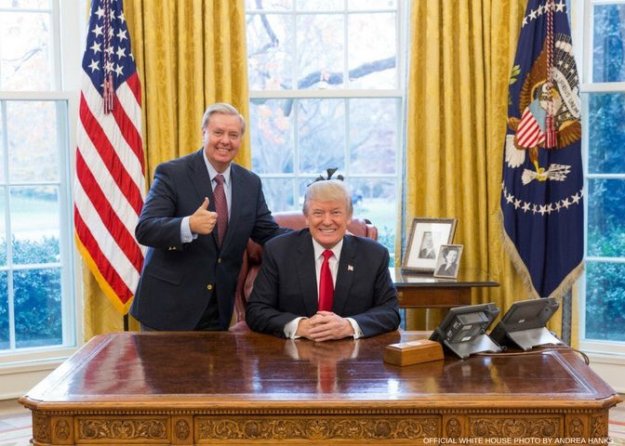 It started with a shout-out, or perhaps I should say a taunt, from my old friend and colleague Mike Fitts:

The objectionable part here is using the president’s name and “make the world a better place.” (Oh, enjoy this @BradWarthen) https://t.co/HaCD7Kis61

I responded to Mike by saying, “I can’t. The toady tweet yesterday with the thumbs-up in the Oval Office was already more than I could take. I hope John McCain didn’t see it…”

That’s it above. The picture came from the Tweet in which Graham said… and I’m not making this up:

You’re keeping your promise to make America safer and more prosperous. And unfortunately for me, you’re doing all this without losing a step in your golf game!

I’ll pause for a moment while y’all go hurl after reading what Lindsey posted….

Do you think “toady” was strong enough? Probably not…

Anyway, someone responded to my response thusly:

So, what happened to cause Graham to cling to Trump? Has he always been this much of a party hack? Blackmail? Simply power hungry?

I responded that I’m not inclined to justify this behavior in any way, but I suspect that if he (Graham) were offering excuses, and being totally honest, he’d say he’d do anything to have some national security influence over this grossly clueless, unstable president…

That’s what Lindsey always cares about. He and McCain reached out to try to work with Obama after McCain lost the 2008 election, hoping to bring about policy continuity. And such continuity was maintained throughout the Obama years, even though, after a showy start right after the election, McCain and Graham seemed to have little hand in.

The tragedy here is that Graham is now abasing himself to a disgusting degree while foreign policy continuity — by which I mean the wise policies followed internationally by presidents of both parties ever since 1945, the maintenance of the global order America helped create and has led my entire life — is not only NOT achieved, but is ignored, blown apart, defecated upon by the ignoramus in the White House.

Our allies are slapped in the face, repeatedly and with increasing vehemence. And the worse the foreign strongman, the more passionately Trump embraces him.

So what is it that Lindsey Graham thinks he is achieving? He’s trading away his self-respect, and getting what, exactly? Does he think things would be worse if he weren’t playing golf with this guy and lavishing childishly transparent praise upon him?…

43 thoughts on “So what IS it with Lindsey Graham and Trump, huh?”