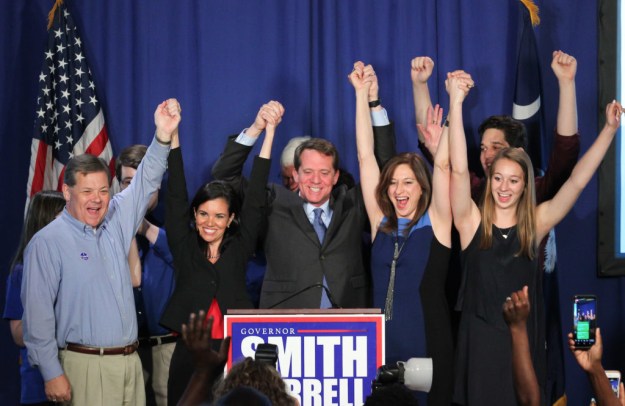 One victory down, one to go.

In blog terms this means that, while Leo McGarry is still the guy I want to be when I grow up, it turns out that in real life, I’m Toby Ziegler.

It means a lot of other things, too. More important things.

There are other things it does not mean. For instance, it does not mean, “Brad’s a Democrat now!” Nope, as always, I’m no more of a Democrat than I am a Republican. As you know, over the years I’ve endorsed candidates from both parties in almost exactly equal numbers. I go with the best candidate, without regard to party. In this race, the better candidate is unquestionably James Smith.

This is partly because I’ve respected and admired James for the ways he has served his state and country, and I like what he wants to do for South Carolina — and because, while I’ve only recently gotten to know her, I think Rep. Mandy Powers Norrell is a tremendous positive force in our Legislature (a point on which her largely Republican constituency has repeatedly agreed).

It’s also because Henry McMaster has repeatedly failed to stand up and be a leader on the issues that matter to South Carolina — or on anything, for that matter. He’s a born follower, and he’ll follow anyone he thinks will help him hold high office. It’s almost like the office of governor is vacant, occupied by a nonentity who offers only one thing to the voters: “Donald Trump loves me.”

So what you have here is a guy who doesn’t care about party being so persuaded as to who the better candidate is in this important election that he’s quitting his day job to put it all on the line. Which should count for something among fair-minded observers.

This is weird for me. Very weird. My job will involve constantly dealing with reporters, and they are unlikely to do what I tell them to do, the way they did in my former life. (Which is just plumb unnatural.) As I step out into this unfamiliar territory, I try to reassure myself that others have successfully made the transition before me. For instance, one of my earliest mentors, John Parish — the unquestioned dean of Tennessee political writers — went to work for Lamar Alexander in 1978, and that worked out. “The Bear” remained a hero to young journos like me.

This is the second stage of my transition. As y’all know, I’ve been very frank about which candidates I prefer ever since I joined The State‘s editorial board in 1994. But that was all just words, as Doug would say. A couple of months back, I took the unprecedented step of putting campaign signs in my yard for the two candidates I most wanted to see win this year: James (this was before Mandy joined the ticket) and my Republican representative, Micah Caskey.

Micah has already won his election — he won his primary walking away, and has no general election opponent. So he doesn’t need my help.

James and Mandy have a long, tough campaign ahead of them, trying to win the governor’s (and lieutenant governor’s) office in a state that hasn’t picked a Democrat for either of those offices in 20 years.

But there are reasons to think these two candidates can win. It starts with their qualifications and positive vision for South Carolina, and ends with a factor called “Henry McMaster” — an incumbent who had to scramble like an unknown (against an unknown) just to win his own party’s nomination.

In any event, James and Mandy are determined to win. And so am I….

57 thoughts on “A bit of news: I’m joining the Smith/Norrell campaign”